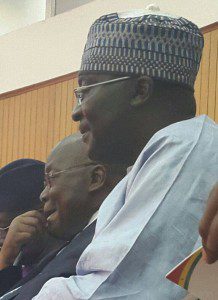 I think Bawumia must start protecting his academic image by veering off this open destructions he is inflicting on his status all in the name of partisan politics.He must have fuller and more up to date information about the current movement than the distortion trade he has engaged himself. He must understand that the current economic quagmire we going through which is being fixed by effective policies came about as a result of certain bad policies passed on to this administration by his NPP administration.In fixing the problem,every good policy designer would consider these factors

Firstly,the volume of total expenditure both on capital and consumption goods and services,must be maintained at a high level.If consumers are in position to make their demands continuously effective,production and therefore employment will be maintained.

By concerted action between the Treasury,the Bank of Ghana and the joint stock banks,variations in the rate of interest will be used to influence the volume of capital expenditure.

Private enterprises encouraged to expand or contrast its own capital expenditure in accordance with a general policy of stabilization.

Capital expenditure by the government and by local and other public authorities timed to offset such swings in private investment as cannot be prevented.Thus government setting a target for the volume of public work each year.When private enterprises shows signs of slackening,the opportunity will be seized to improve the equipment of society through increased public investment in building,communication, power supply etc.

Variation of taxation rates might also be used for this purpose.The government must continue to study this and other methods of influencing the volume of consumption but looking at present situation on our hands,not prepared to propose their adotion.

Bawumia must understand as an economist that fiscal policy must always ba based on the principle that the budget must be balanced over a period of the year,without rigid insistence on striking a balance each year regardless of state of the economy.The aim will be to relate increases in the national debt to growth of real national income.The government have equally in mind the need to maintain a high level of total expenditure and the need for a policy of budgetary equilibrium,such as will maintain the confidence in the future which is necessary for a healthy and enterprising industry.

You don?t just stand before Ghanaians to propound your own economic theories and paint gloomy picture of an economy which is gradually picking up.Such reckless and distorted academic presentation contribute to the difficulties we experiencing,the kind of confidence needed to move the system wouldn?t be there because of this wicked economic evangelization. I hope Bawumia heard of decision by Kentucky to buy 70% of its chicken from our local producers,one decision which is is going to impact hugely on our economic dynamics,this was made possible because of prudent policy of government to support the poultry industry.The cut in taxes of many products including farm implements and android phones are all policies which are impacting positively on the economy.Local rice production increased substantially because of prudent policy introductin something Kufour hailed recently.

In 2007 he was around when the Kufour administration went for the 750 million Eurobond with a coupon of 8.5% at ten years did he bother his head to find out how the money was used.After that reckless spending in 2007 which led to the decision to sell Ghana Commercial Bank and TOR including Ghana Telecom, his people adhered certain recommendations when the fund staff argued that the civil service reforms were needed to achieve the medium term goal of attracting high quality labour and reducing total public sector employment.These were the problems identified which were being fought vigrously before their exit,can he say something has changed.Te wage bill has swelled up because of the single spine,government support for the health insurance programme increased because of increase in the number of people assessing it and alse increasing number of drugs it covers.

I have never seen an astute economist discuss assets without liabilities or vice versa.He drive on new roads visits his home regions and see new schools why does he always refuse to talk about implemented programmes. One shameful act he displayed was the way he laughed with great joy whenever he mentioned problems facing us and speak to show his wishes that the problems remain perenial.