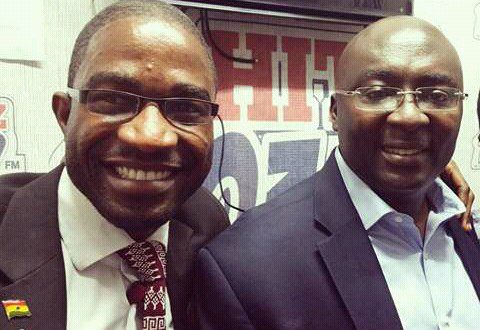 The running mate of the New Patriotic Party, Dr Mahamudu Bawumia, has indicated that lack of investment in the creative arts is one of the biggest challenges hindering the progress of the sector.

He believes Ghana is blessed with talents who end up not living their dreams because of funding.

“Many countries have actually invested and made a lot of progress and benefited from that investment in arts and entertainment. Unfortunately, I don’t think Ghana has recognised the job opportunities in arts. One of the missing link is adequate investment in the arts where a lot of people can do things yet they don’t get the help,” he noted in an interview with KMJ on Hitz FM’s Daybreak Hitz, Wednesday.

Dr Bawumia who is mostly heard giving lectures on the economy stated that the NPP intends investing in the arts should the party be elected into power in the 2016 general elections.

“We believe that if we invest in this industry, it can make a major change in our output and GDP contribution. It is really worth supporting,” he said.

Earlier, abrantepa.com published that some industry players are calling for Presidential Debate on Arts before the 2016 general elections. The proposal follows a consistent neglect of the arts by governments. Arts and entertainment writer, Kwame Dadzie, who started the crusade has argued that Presidential Debate on Arts would psychologically inspire the politician to ‘think arts’ and fine solutions to the numerous problems plaguing the creative arts industry.