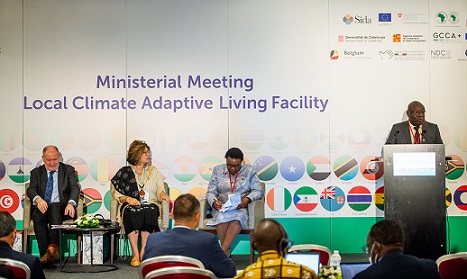 The Minister for Environment, Science, Technology and Innovation Hon. Dr. Kwaku Afriyie has been appointed as the new Ministerial Ambassador for the Local Climate Adaptive Living Facility (LoCAL) with the goal of engaging in advocacy aimed at increasing the finance available for local adaptation to climate change.

Hon. Dr Kwaku Afriyie joins nine other ministers from countries across the world that have volunteered as LoCAL Ministerial Ambassadors. Their aim is two-fold: to raise attention to the need for more climate finance and international action on local adaptation to climate change in the world’s most impacted countries and to highlight the potential of the LoCAL Facility as a mechanism for effective climate finance delivery for locally led adaptation.

“Climate change impacts continue to affect hundreds of millions of people worldwide, particularly low-income people in vulnerable countries. I believe that in the spirit of South-South cooperation we can share learning and experience,” said Hon. Dr. Afriyie, speaking at the LoCAL ministerial meeting on 12th May 2022. “And, that we can urge increased use of LoCAL as a mechanism for increased climate finance delivery that meets the scale and speed needed for ensuring the well-being of our people,” he said.

The Minister without Portfolio in the Ministry of Economic Growth and Job Creation in Jamaica Hon. Matthew Samuda, also signed up as a LoCAL Ministerial Ambassador at the same event in Brussels, Belgium.

The LoCAL Ministerial Meeting followed the 9th Annual Local Board meeting, which took place on the 11th of May bringing together some 100 representatives from LoCAL countries to agree on priorities and budgets for the coming year.

The LoCAL Facility is a community of some 32 countries using or designing their use of the LoCAL mechanism to channel finance to communities battling the impacts of climate change. LoCAL countries span Africa, Asia, the Pacific, and Caribbean. All members are highly impacted by the effects of climate change though as LDCs, developing or African nations, their low emissions base mean they have contributed little to global warming and its catastrophic impacts on the planet.

Hon. Matthew Samuda of Jamaica, the first Caribbean country to join the LoCAL community, said LoCAL offered an opportunity to implement systems for adaptation financing that ensure funds reach the people that need it – local communities.

“For obvious reasons, the Government of Jamaica considers adaptation a priority – our people are truly on the frontlines of a growing climate crisis. The LoCAL mechanism is indeed exciting for the opportunity it presents for vertical integration of adaptation at the local level,” said Hon. Samuda of Jamaica. “We believe that LoCAL will give us a boost in the right direction, [… ] to build simple systems for finance,” he added.

The Brussels meeting provided an opportunity for LoCAL countries to share experience and plan cooperation as they prepare for crucial meetings in the climate change calendar, including the Climate Change sessions slated for Bonn in Germany next month and COP27 in Sharm El-Sheikh, Egypt, in November 2022.

The LoCAL Facility was designed and is hosted by the UN Capital Development Fund and has grown from initial pilots in Bhutan and Cambodia in 2011, to a global climate financing mechanism that has to date mobilised over US $125 million for locally-led adaptation.

“Women, children, elderly and vulnerable groups are especially affected by the impacts of climate change,” said Agnes Mary Chimbiri Molande, Co-chair of the LoCAL Board and global coordinator of the Bureau for the Least Developed Country Group and Ambassador Extraordinary and Plenipotentiary Permanent Representative of the Republic of Malawi to the United Nations. “This should remind us that we need to be people-centred and that national ownership is key.”