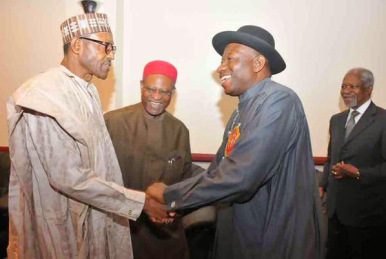 The Rivers State All Progressives Congress (APC) Governorship Campaign Train finally landed in Okrika Local Government Area today after two aborted attempts, taking the home Local Government of the First Lady, Dame Patience Jonathan, and former warlord, Chief Ateke Tom, by storm. APC and its Gubernatorial Candidate, Dr. Dakuku Peterside, demystified Dame Jonathan by pulling an unprecedented crowd at the rally held at the National School field Okrika, thus underlining is determination to win the March 28 and April 11 elections in the convincingly with votes from all sections of the State not minding the resort to promotion of violence by the PDP leadership as its only agenda for the 2015 polls. 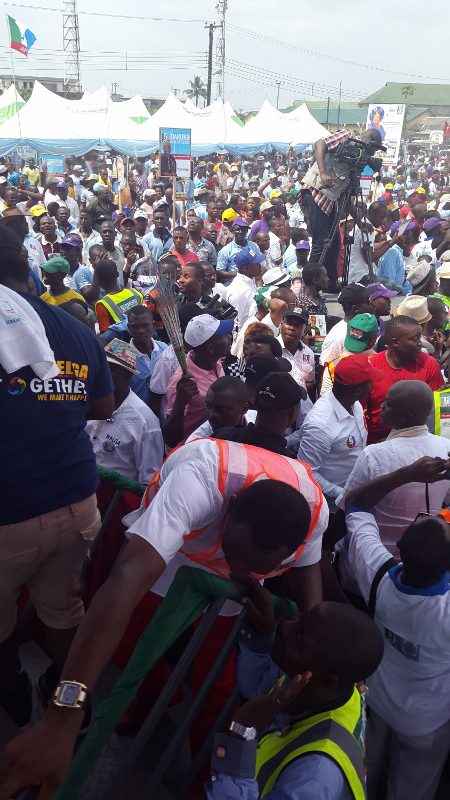 An elated Dakuku Peterside sang and danced with the people in what was termed by some of those that attended the rally as a victory dance over the powers of darkness. Upon arrival in Okrika, Dr. Peterside first visited Government Secondary School Okirika, where he had his secondary school education, before hitting the venue of the rally. In his address to the people of Okrika before the rally was disrupted by the PDP hoodlums that attacked the rally ground with explosives and assorted sophisticated guns, Dr. Peterside assured them that upon being voted in as governor, he will liberate them from the hands of the agents of darkness that have held them hostage all these years. He commended and congratulated the people for their bravery in the face of terror.

Peterside unequivocally declared that no amount of intimidation will deter APC from forming the next government in Rivers State. He made it clear that he is out to serve the people of the State and will not look back even if the struggle will cost him his life. ?Let the PDP continue to bomb us and we will continue to spread the gospel of peace and love for our State,? Peterside said. He reassured the people of the State that he will not disappoint them, saying: ?Our people are progressives and we are determined to provide leadership and the few unprogressives in our State will not deter us from this divine mandate to liberate our people from evil minded people who are desperate to gain power against the will of our people.?

Rivers State APC Chairman, Dr. Ikanya Ibiamu, condemned the unwarranted attacks on party faithful, which made it impossible for the party to hold the rally before now. He described PDP as a dying party which is clinging at everything, including promoting insecurity, in a doomed bid for survival. ?With the success of the Okrika rally not minding the explosions and shooting to scare our people away from the rally ground, we have demonstrated character by uniting against the evil and darkness pervading our State,? Ikanya said, adding: ?We heartily thank the great Okrika people for turning out en masse to welcome their Governor, Dr. Dakuku Peterside. Darkness cannot be allowed to prevail over light. We are happy that by this rally, the First Lady, Dame Jonathan Patience, whatever she stands for is destroyed and demystified. We are proud of the Okrika people and we are assured that they will demonstrate this during the election proper so that collectively we ensure that those threatening our lives will not succeed in their evil plots against our State.

?Rivers APC unreservedly condemns the continuing resort to violence by a desperate Peoples Democratic Party, which, having seen the handwriting on the wall of its imminent defeat during the polls, is bent on making Rivers State ungovernable. Let the world see how PDP intends to ruin our economy by promoting insecurity in our State but God will surely protect us from all this madness. We urge the entire world not only to condemn this act of violence by the PDP Leadership but intervene by calling those behind these unwarranted attacks on our party faithful to order.

Finally, the security organs must fish out all those behind this ugly incident that disrupted the rally of our party and attend to them accordingly no matter who are those that sponsored the attack to reassure us that we are still citizens of this nation?