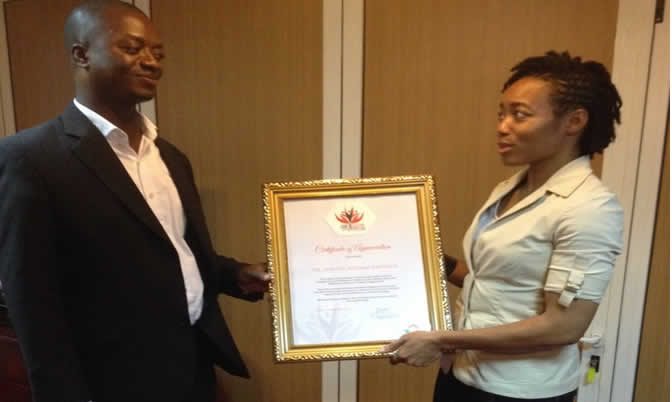 Mr.Dickson presenting the certificate of appreciation to Dr. Rawlings

The Management of TV3 Network Limited has presented a certificate of appreciation to Dr. Zanetor Agyeman Rawlings for her immense contribution to TV3?s June 3 Disaster Support Fund.

Dr. Zanetor spearheaded the fund that was launched on June 8 to among other things, raise GH? 10,000,000 to provide relief for the June 3 flood victims as well as fund the education of the children of the flood victims.

The Fund has since June presented assorted relief items to the victims, educated them on best sanitation practices and sensitized them on how to care for their environment in order not to trigger such natural disasters.

Hours of torrential downpour in Accra on June 3, left the national capital in chaos as a result of flooding of most areas, causing the Goil Fuel Station at the Nkrumah Circle where some people were sheltering, to explode.

At least 150 lives were lost and hundreds rendered homeless while properties worth millions of cedis were also lost to the floods that brought business activities to a halt in the city the next morning.

Presenting the certificate, the Director of Business Development, Daniel Amartey-Amarh, thanked Dr. Zanetor for her contribution, noting that her role in the project was highly appreciated by TV3.

?This citation is presented as a token of appreciation from the management of TV3 Network Limited for your relentless effort and dedication to the June 3 Disaster Fund,? the certificate read in part.

?Your role as a social advocate and lead campaigner for this project was phenomenal and instrumental to the success of the June 3 Disaster Support Fund, and its elevation as a national campaign,? it added.

Dr. Zanetor in receiving the certificate said ?it was a real team effort so I can?t take the credit on my own. We had an amazing team? and I think it?s a credit to TV3 as well, that you had such a dynamic team.?

?Most of what we did was out of the scope of what we initially planned but the dedication and commitment was overwhelming? she added and thanked the entire team for their support.

She said the disaster bothered her to the extent that it was only right she joined hands with TV3 to do something for the affected people, saying, ?when something goes wrong, you don?t stand by and wait for somebody else to come and fix it?.

Dr. Zanetor said the project has begun yielding results, noting that there has been an increase in the enthusiasm with which the people in some of the communities care for their environment.

The June 3 Disaster Support Fund will be making its final disbursements to the burns victims and the recipients of the endowment fund later in the month.