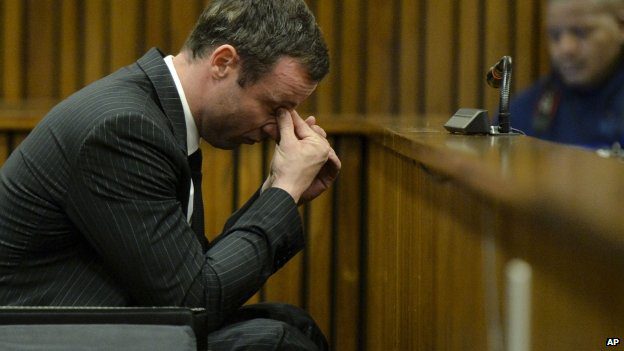 Prosecutors have twisted the facts to discredit South African athlete Oscar Pistorius in his murder trial, his lawyer has said in closing remarks.

Barry Roux said the double amputee should have faced a lesser charge of culpable homicide over the shooting of his girlfriend Reeva Steenkamp.

But Mr Roux conceded that he should be found guilty of negligence for discharging a firearm in a restaurant.

The Olympic athlete pleaded not guilty to all the charges he faces, including two counts of shooting a firearm in public and the illegal possession of ammunition.

In the early hours of Valentine’s Day last year, he says he mistook his girlfriend – a model and law graduate – for an intruder when he shot her through a toilet door in his home in South Africa’s capital, Pretoria.

At the end of the session on Friday, Judge Thokozile Matilda Masipa adjourned the trial until 11 September when she will deliver her verdict. She and her assessors have 4,000 pages of evidence to consider.

The prosecution tried to characterise Mr Pistorius as a “hothead” who intentionally killed Ms Steenkamp after an argument.

His defence team portrayed him as having a heightened response to perceived danger due to his disability and background.

In court on Friday, Mr Roux said growing up with a disability conditioned Mr Pistorius always to confront danger because he could not flee.

He described it as a “slow burn” of insecurities and compared it to an abused woman shooting her abuser.

Barry Roux tore into testimony given by some of Oscar Pistorius’ neighbours during his rebuttal of the prosecution’s case. The Stipps couple said they heard a woman’s screams shortly before hearing gunshots, which goes against Mr Pistorius’ version that Reeva Steenkamp did not scream at any point before she died. The defence lawyer spent a lot time discrediting their evidence, describing it as “unreliable”.

He also made a compelling argument to show police tampering with the crime scene. The minute-by-minute timeline presented by the defence also seemed detrimental to the prosecution’s assertion that there was an argument before the shooting.

But the fact that Ms Steenkamp was killed is not disputed, so now the judge must decide if it was murder or culpable homicide. Mr Roux urged her to evaluate Mr Pistorius as a reasonable man and then consider his actions in the light of his disability and anxiety disorder.

Mr Roux also dealt with phone data evidence on the night of the shooting to show that the timeline of events fits the defence’s argument that Mr Pistorius fired the shots at the toilet door first on his stumps.

Realising he had shot Ms Steenkamp by mistake, the defence says Mr Pistorius put on his prosthetics and used a cricket bat to knock down the door at 03.17 local time – five minutes after he says shots were fired.

The prosecution alleges that the noises heard at 03.17 were the shots being fired.

Mr Roux said analysis of the evidence showed there was anxious high-pitched screaming followed by shouts of “help, help, help” between the two sounds, which near neighbours say were made by a man, not a woman as other witnesses testified.

Earlier, the defence said that there had been “no respect for the crime scene”, saying the state’s case was discredited as Mr Pistorius’ house was tampered with inadvertently, with a fan and duvet being moved.

State prosecutor Gerrie Nel, in his closing statement on Thursday, argued the athlete “cannot escape” a murder conviction, accusing him of being a “deceitful witness” who told the court a “snowball of lies”.

Known as the “bull terrier”, prosecutor Mr Nel said the athlete’s lawyers had presented two lines of defence that “can never be reconciled”.

Mr Pistorius said he had fired both involuntarily and also out of fear, Mr Nel argued, insisting the court had to choose only one of his defences.

Last month, a psychiatric report said Mr Pistorius had post-traumatic stress disorder but no mental illness that could prevent him being held criminally responsible for his actions.

If found guilty of murder, the 27-year-old, who went on trial on 3 March, could face life imprisonment.

If he is acquitted of that charge, the court will consider an alternative charge of culpable homicide, for which he could – if convicted – receive about 15 years in prison.

For the first time since the trial began in March, the fathers of Oscar Pistorius and Reeva Steenkamp appeared in court for the closing .