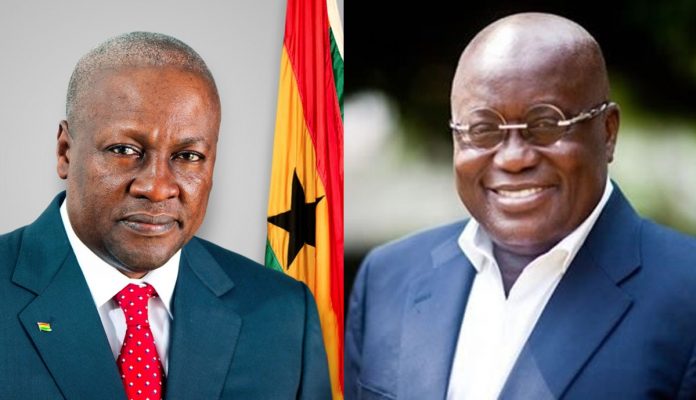 I have taken my time to fully-digest the publication by a Namibian media outlet chronicling how John Mahama led Ameri Group into that country.

This business entity, which is embroiled in shady deal involving the stealing of a whopping $150m belonging to ordinary Ghanaian taxpayers, was led into Namibia by a character under whose nose this very entity ripped off Ghanaians.

This indeed makes it clear that John Mahama being a leading-negotiator for Ameri in Namibia, definitely could not have been accidental coincidence, but a conscious, deliberate, calculated, planned and well-executed corruption mission.

I have been around Nana Addo for years and have gotten to know how sincere he is in his convictions to serving Ghana, and how impeccable his personal integrity is.

The sole motivation for Nana Addo to endure many tears of insults from characters who, according to Pastor Mensah Otabil, “themselves look worse than insults”, is to serve with integrity, improve the lives of ordinary Ghanaians and leave a lasting legacy for generations yet to come.

By nature, Nana Addo is never materialistic, selfish or greedy. He will give you whatever he has when you approach him with a problem. In cases where he is not in the position to offer instant assistance, he will offer you words that will sooth your pain and put smile on your face. The man is an embodiment of SINCERITY, HUMILITY, KINDNESS, and above all, IMPECCABILITY in INTEGRITY.

It is knowledge of the character of Nana Addo which actually made me convinced that “HE IS A PRESIDENT THE GOOD PEOPLE OF GHANA, HAVEN’T HAD THE OPPORTUNITY TO HAVE” when he was voted against in two successive elections that were obviously stolen but which he accepted with gracious grace.

Under the stewardship of Nana Addo, the scenarios of blatant looting to State coffers by political appointees cannot, and will never happen, because, the man is not corrupt and therefore has the moral fortitude to whip his appointees in-line, dismiss them when the need be, and even prosecute if that becomes necessary.

This personal integrity of Nana Addo is the single most valuable treasure the good people of Ghana stand to heavily profit from, for the fact that the nation’s resources will be judiciously managed to ensure its equitable distribution. The era where massive government contracts were hijacked and monopolized by blood-brothers and inner-circles of the president, has indeed ended.

The effects of corruption are much more devastating than total civil conflagration and therefore to have a president with impeccable personal integrity is extremely vital to the overall well-being of the masses, while the opposite is a great tragedy to the dreams of the people.

It is for this reason that I’m very much convinced the return of John Mahama in 2020 will certainly spell the electoral doom of the ndc. Admittedly, i respect John Mahama, first as a person, and also, a once occupant of the highest office of the land. But when it comes to assessment of his integrity, I will always score him zero.

Now, a leader who lacks personal integrity will have no moral authority over his subordinate; and this is where the FREE-FOR-ALL misbehavior takes hold in society. This then will culminate in the highly obnoxious enterprise of “CREATE, LOOT and SHARE”, where 40-solid dud cheques are issued to clear goods from our ports.

Contract sums are heavily-over-bloated; Ford Expeditions are rolled over from our neighboring countries and deposited right at the seat of government, as rewards for dishing-out juicy contracts through dubious procedures.
Heavy equipments procured with taxpayers monies are given for free, to the blood-brother of the president for his private use. Concubines of top government officials are offered, through dubious process, contracts to brand buses at cut-throat cost to ordinary Ghanaian taxpayers.

I have heard ndc propagandists claiming Nana Addo has appointed members of his family into various public offices; but would Ghanaians prefer; qualified family members occupying positions, or, blood-brother and family members being offered every single government contract with deliberately over-bloated price-tags?

Indeed, there is one thing i can confidently assure the good people of this country of, and it is simply this: Nana Addo will serve his 2-term office, graciously exit without amassing ill-wealth by way of hotels in Dubai, Mansions in America, fat offshore bank accounts and illegitimate kids dotted across the country.

Bawumia Is Stoned By The NDC And Others Because They See A Lot Of Harvest In Him: Razak Kojo Opoku Writes