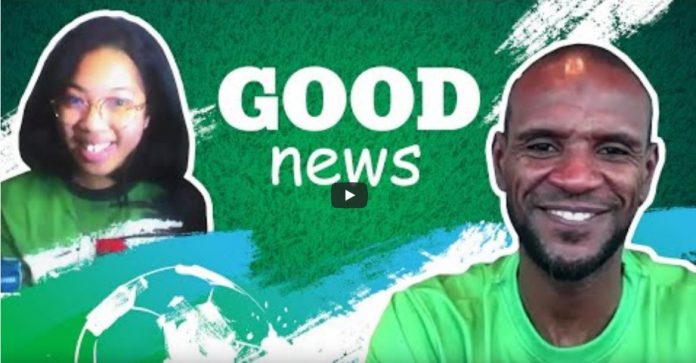 The former French international and two-time winner of the Champions League with FC Barcelona supports the Gazprom International Children’s Social Programme Football for Friendship (F4F) in his capacity as a UEFA ambassador. As part of the Good News Show, he answered the questions of the 15-year-old F4F Young Journalist Irintsoa Rakotomamonjy from Madagascar.

Today, Eric Abidal is a football manager. He told the Young Journalist that the most emotional moment of his career had been his return to his team after an operation following a cancer diagnosis in March 2011. With his children’s cancer charity, which he founded in 2015, he wanted to make a contribution to the fight against this illness. And it was his dream to conquer cancer completely. He added that during the corona pandemic his charity – and also that of his wife – had tried, in spite of the lockdown, to stay in touch with the children it supports, and had visited them in hospital and brought them small gifts.

When Irintsoa told him that boys and girls in the F4F programme played in a team with equal rights, Eric Abidal replied that women’s football had already made enormous progress and was continuing to grow. He was convinced that women are showing the world that they can develop similar abilities to those of men. He predicted that women’s football would have become a global sport in 10 years’ time.

For him, it was very important to experience the emotionality of football on the playing field. But in sport too digitisation was gaining ground. He thought that in 10 years’ time e-sport would be the number one sport. Irintsoa explained that, in the case of F4F, the Championships in 2020 and 2021 were contested in a digital format.

The Young Journalist went on to tell her famous interview partner that the participants in F4F shared the programme’s Nine Values: friendship, equality, fairness, health, peace, devotion, victory, traditions and honour. When asked which value was the most important for him, Eric Abidal said it was friendship. For him, this included a good relationship with everyone, teamwork, and respect for others.

As a successful footballer, his advice to young people who are striving for a career in sport was, above all, to respect other people, their parents, their teachers, their trainers and their friends. And they should have big dreams, which of course they would have to work hard to achieve. To see the interview, please click on the following link: https://youtu.be/GhLvsy_tQbQ.

Following the ZOOM-interview with the Young Journalist from the F4F Press Centre, Eric Abidal held a short football training session with the 13-year-old F4F 2021 participant from Belgium Elias Ali Mohamad. After a short warm-up phase, Abidal showed his young training partner a few tricks and encouraged him to practise them with him. This episode can be viewed by clicking on the following video link: https://youtu.be/bsK04TU0ZV8.

Before Eric Abidal, the UEFA ambassadors Luis Garcia from Spain, Kelly Smith from England and Robert Pirès from France had already taken part in #STADIUMISWHEREIAM and had spoken on the Good News Show with the Young Journalist about Football for Friendship, their life and their career.