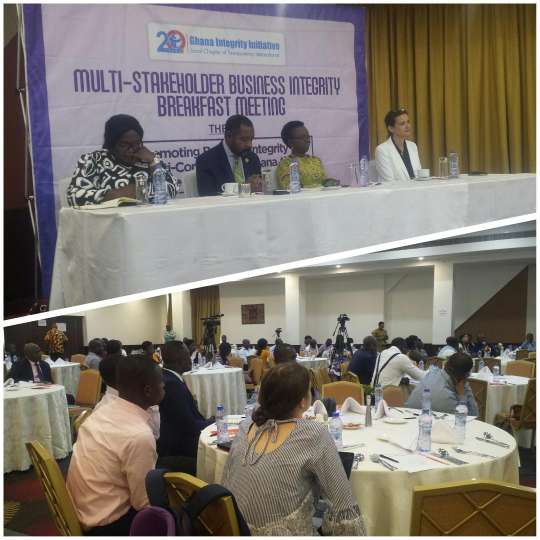 Mrs Mary Awelana Addah, the Programmes Manager of the Ghana Integrity Initiative (GII), has asked the public to drop the cliché that Ghanaians laws do not work but rather test them by reporting corrupt practices.

She said citizens often failed to report corrupt practices because they thought nothing could be done about the complaints.

She urged them to resist, reject and report such acts to the appropriate quarters for redress and that would make duty bearers accountable to help to reduce or eradicate corruption completely.

It was on the theme: “Promoting business integrity and anti-corruption in Ghana – The role of the private sector,” under the sponsorship of the Embassy of the Kingdom of the Netherlands.

She explained that victims were either afraid of being victimised when they reported a person involved in corruption or because they were “each other’s keeper”.

Mrs Adda cited the Advocacy and Legal Advice Centre (ALAC), a platform created for such reports and advised them to follow-up and persist and they would get results.

She assured the public that there were representatives from the Economic and Organised Crime Office, the Police Intelligence & Professional Standard Bureau (PIPS), the Commission on Human Rights and Administrative Justice, and Labour Commission, among others on the platform who were dedicated to responding to their calls.

Giving statistics to support her claim, she said with 170 complaints made in 2019, 94 were corruption related, 29 were resolved, 49 referrals and 16 received legal advice.

Mrs Elsie Bunyan, the Board Chair of GII, called on Ghanaians to make personal commitments to change the narrative by being ambassadors of change themselves.

She said they would suffer for standing for what is right but they should not give-up for posterity sake.

Nana Osei-Bonsu, the Chief Executive Officer of Private Enterprises Federation, Ghana, advised Ghanaians to be acquainted with the rules of engagement so as to demand for their rights.

Ms Katja Lasseur, the Deputy Ambassador of the Netherlands, called for a collective effort between government and the private sector in the fight against corruption.

Participants called for streamlining of administrative processes that would make all institutions conform to the rules and regulations to avoid delays and induced payments for the issuance of licenses and certificates for businesses.

She charged the citizenry not to beg for services they were entitled to but should put their grievances into writing and demand action through the appropriate channel.

Treason Trial: My greatest challenge is my profession – Witness