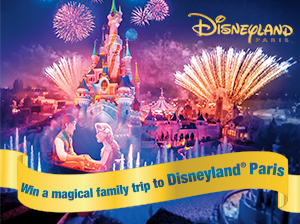 Win a trip of a lifetime to Paris with your family! MultiChoice Africa and the Disney Channel are giving you an opportunity to win a once in a life adventure to experience Disneyland in Paris, France with your family. One lucky DStv subscriber will win an all expenses trip for a family of four (two adults and two kids) to visit the magical world of Walt Disney in the city of love and a world beyond imagination, Disney in Paris.

The Disney Channel is owned by the Disney-ABC Television Group, a unit of the Disney Media Networks division of The Walt Disney Company. Its programming consists of original first-run television series, theatrically-released and made-for-cable movies as well as other selected third-party programming for teenagers and adolescents from ten (10) to sixteen (16) years. The Disney Junior shows are targeted at younger children between three (3) and nine (9) years and the content includes exciting and animated and live action series such as Phineas and Ferb, Fish Hooks, Gravity Falls, Wander Over Yonder, Good Luck Charlie, I Didn?t Do It, Dog with a Blog, A.N.T. Farm, Liv and Maddie, Jessie and Austin & Ally.

There will be a random draw after the 31st March 2014 and the winner will be notified via a telephone call and his or her details will also be published on the competition section of the DStv website.

For further information about the competition, kindly visit www.dstv.com/Competitions.