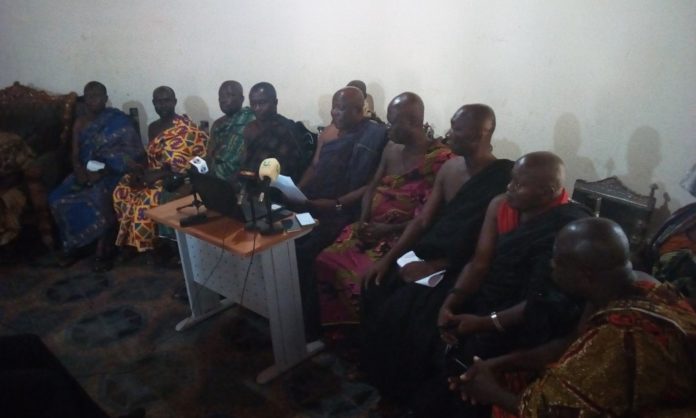 There was a media report on Monday, December 14 that the DTC ordered a group of young men to assault Mr. Baffour, a communication team member for the ruling New Patriotic Party (NPP) in the Jaman South Constituency.

According to the report, Baffour was surrounded by the young men at ‘Sakora’ park, a location within the Drobo town centre, assaulted and marched him to the ‘Krupiase’ Palace where he was given severe lashes as a result of purported unpleasant utterances against Nana Ansuaa, the ‘Omanhemaa’ (paramount queen).

Addressing a press conference on Tuesday at the ‘Krupiase’ Palace, Drobo, in the Jaman South Municipality of the Bono Region, the chiefs expressed surprise and much worry about hearing “the name of the Council being mentioned in such an unlawful action”.

Nana Amu Yeboah Asuama, the Gyaasehene who spoke on behalf of Okokyeredom Sakyi Ako II, the paramount chief, said “the DTC wishes to emphatically deny knowledge of, and involvement in the supposed assault of the NPP communicator”.

He stated the ‘Omanhene’ (paramount chief) who is the Vice-President of the Bono Regional House of Chiefs left for Sunyani after he had cast his vote in the general election on Monday, December 7, 2020 and had since not returned to Drobo.

The ‘Omanhemaa’ too who sojourns and works in Accra left Drobo soon after she had voted.

Nana Asuama therefore proclaimed the innocence of the DTC in that assault incident, stressing “the DTC is a responsible body of chiefs who recognise and respect the rights and liberty of the individual, including the right to dignity, self-respect and due process of law”.

“We condemn in no uncertain terms all such hatred and anti-social acts,” he said and therefore cautioned those perpetrators to desist from that.

“We strongly caution persons who want to disrespect and drag the name of the DTC in the mud to immediately stop that to avoid facing the wrath of the Omanhene and the members of the Council,” Nana Asuama warned.

“We are peaceful and will continue to be peaceful, let’s all chose the path of peace and not violence so that we can develop this area,” he implored.

Later in an interview with the Ghana News Agency (GNA), Mr. Baffour, aged 36 and a teacher at Buobunu R/C Junior High School at Drobo explained that on Monday, while on his way back from school, one Clement called him on mobile phone to request for assistance.

“Because I am very close to Mr. Yaw Maama Afful, the NPP incumbent Member of Parliament for the area, many people usually come to me for assistance, so I directed him to where he can locate me”.

“Surprisingly two young men popularly known in town as Atta Bonna and DJ Operator appeared and said you have been insulting the Omanhemaa”.

According to Mr. Baffour, “they did not allow me to explain anything but started beating me mercilessly and marched me to the ‘Krupiase’ Palace where there was no chief present”.

“They compelled me to kneel down under a tree and another young man only known in town as ‘Vandam’ and two others joined ‘Bonna’ and D.J to give me lashes mercilessly”.

Mr. Baffour denied the allegation of insulting the ‘Omanhemaa’, saying “I am a member of the Drobo royal family and it has never happened that I have spoken against the Omanhemaa or any of the chiefs”.