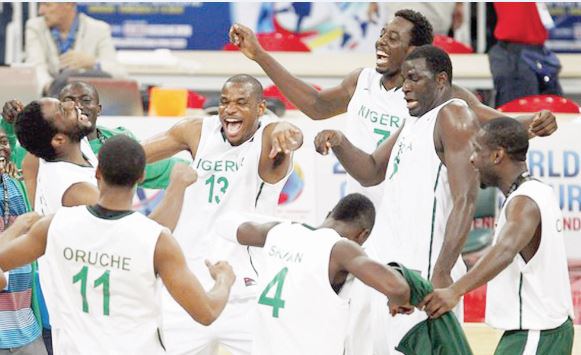 The Nigeria senior male national basketball team, D?Tigers have been pitted against former champions and host Tunisia in Group A at the draws of the 2015 FIBA Africa Basketball Championship which took place at the Carthage Acropolium in Tunis on Saturday.

The D?Tigers who are now the 6th ranked team in Africa (40th on the FIBA World rankings) will be hoping to out-dunk 4th ranked Tunisia, who last won the competition in 2011.

Also seeded in the group is a little known Uganda who are making their debut?at the continental showpiece and the 1st of 3 wild card teams which will be announced at the end of April by FIBA Africa.

The tournament which will be held from August 19-31 in the Tunisian cities of Nabeul and Tunis will serve as a qualifying event for the 2016 Rio Olympic Games.
In Group B, defending champions Angola who will be gunning for their 12th title under the tutelage of experienced Coach Moncho Lopez will battle against Mozambique, Morocco and another wild card entry.

In Group C, AfroBasket 2013 runners up, Egypt, who will be hoping to go a step further than their fairy-tale run carried them in Abidjan has set up an interesting matchup against old foes in Cameroun, Gabon and Mali who threw up a surprise to qualify ahead of 2013 bronze medalist Senegal.
Finally, the Elephants of Cote d?Ivoire who dramatically ended up 4th at home in 2013 will have the Nigerian-born Alex Uwora-tutored Cape Verde to battle against; others are debutant Zimbabwe and the 3rd wild card pick to compete against in Group D.
It is the third time that Tunisia will get to stage the AfroBasket, having previously hosted it in 1965 and 1987.