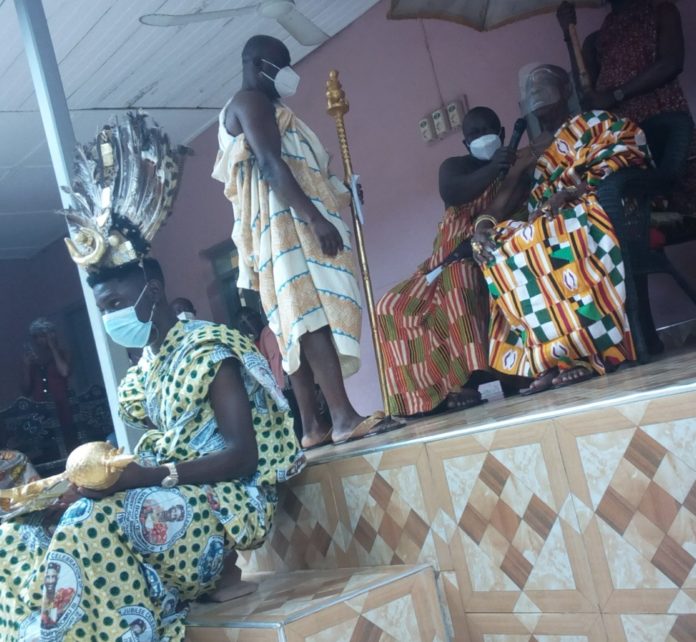 Nana Boakye Tromo II, the Paramount Chief of Duayaw-Nkwanta Traditional Area, has appealed to President Nana Addo Dankwa Akufo-Addo to prioritise the construction of a fire training centre for the town to enhance training in fire safety.

He said the ground was broken for the construction of the fire training academy during former President Mahama’s era but since then nothing had been done about it.

Nana Tromo made the appeal when President Akufo-Addo paid a courtesy call on him on Saturday at his palace in the Tano North Municipality of the Ahafo Region at the commencement of his two-day working tour of the Region.

He was accompanied by Ministers of State, Members of Parliament and officials of the New Patriotic Party.

Nana Tromo said: “The Centre is a crucial project that I want to see its accomplishment while alive”.

He said the Traditional Council, with support from the good people of the area, allocated a large expanse of land and some building materials to aid in its construction but there was nothing to show for it.

He commended President Akufo-Addo for his competency and good governance, particularly for the implementation of the Free Senior High School Policy, despite the perceived challenges at its onset.

Nana Tromo said the policy had not only eased the financial burden on parents and guardians but had also created opportunity for all needy but brilliant junior high school graduates to acquire secondary education.

President Akufo-Addo, on his part, said the fire project would be highly beneficial to the country and gave the assurance that his government would take steps to ensure its construction and completion.