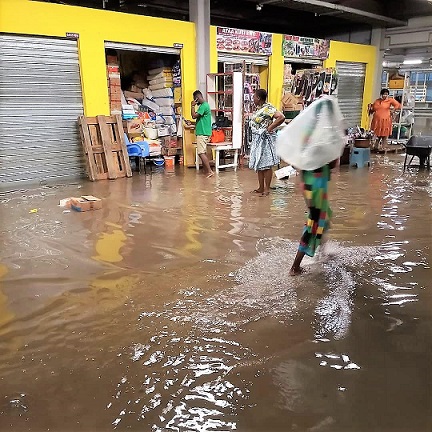 Mr. Osei Assibey-Antwi, the Mayor of Kumasi, has expressed shock at the recent retrieval of some lumber from the Kejetia Market drains, describing the discovery as unfortunate.

“How can anyone decide to deposit such large tree trunks in the drainage system?” he quizzed, saying the recent flooding in the metropolis “has exposed the irresponsibility of some residents towards environmental-sanitation issues.”

Reacting to the development, the Mayor told the Ghana News Agency (GNA) that the haphazard dumping of solid materials into water bodies was partly to blame for the flooding at the trading hub.

The incident saw the wares of more than 400 stores located within the facility being destroyed.

Mr. Assibey-Antwi said the city authorities were determined to find a lasting solution to the perennial flooding, the latest one claiming four lives, including that of a one-year-old boy.

A team of disaster management experts, as part of its investigations’ into the recent flooding at the ultra-modern Market, identified five large tree trunks dumped in the drains.

According to the experts, including personnel of the Ghana National Fire Service (GNFS), National Disaster Management Organization (NADMO) and some civil engineers of Contracta Construction Limited, the presence of the lumber in the drainage system affected the free flow of water.

Mr. Emmanuel Danso, a Consultant Engineer of the Contracta Limited, the Brazilian construction firm which executed the Kejetia Market project, in an interview with the GNA, said the lumber identified in the drains were believed to have blocked the water channel.

He said consequently, the drains overflowed in the course of the recent rainstorm, explaining that the retrieval of the tree trunks would improve the situation

“Once you block the water path, there is likely to be flooding,” he said.