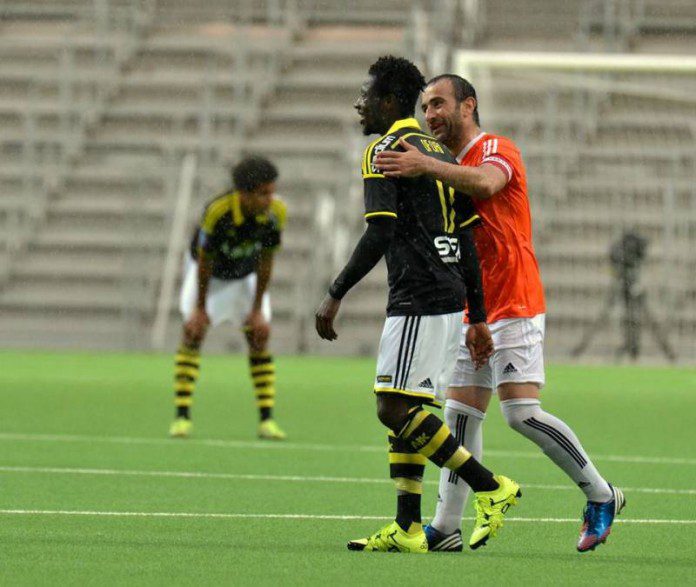 The leader of Slovakia’s Premier League Dunajska Streda Football Club advanced for the first time in the team’s history to the third round of the Europa League Qualifiers after defeating Jablonec Football Club from the Czech Republic 5-3 in a goal-rich match-up on Thursday.

Dunajska Streda became the only Slovak football club to continue its journey in any European club competition after defeating the fourth placed team of the last season of the Czech Fortuna Liga FK Jablonec despite trailing twice and forcing the attractive game into overtime.

A wonderful through-pass by the home team’s defender Eric Davis sent Marko Divkovic on a wild run and put him head-to-head against Jablonec’s goalkeeper Jan Hanus in the sixth minute and the Croatian striker sent a beautiful lob shot over him to open the score and put Dunajska Streda ahead.

20 minutes later, Jaroslav Zeleny got lucky and his shot from the top of the box bounced off a teammate and into Dunajska Streda’s net to tie things up for the visitors 1-1.

Jablonec took the lead for the first time 12 minutes into the second half after the Slovak striker Ivan Schranz tapped in a loose lob from his teammate past the outstretched Dunajska Streda’s goalkeeper Martin Jedlicka.

Moments later, Divkovic’s second goal of the night leveled the score once again when he capitalized on a fast-break through-pass in the 65th minute. But soon after, the visitors went ahead for the second time when Schranz successfully executed a penalty after a handball in the penalty area by goalscorer Divkovic.

The hero of the night became the home team’s Moldavian striker Ion Nicolaescu who tied the game five minutes before the end of regulation on his debut and then put Dunajska Streda ahead 4-3 six minutes into overtime with a quick and un-saveable shot from the edge of the box.

Davis secured Dunajska Streda’s historic triumph with yet another wonderful goal from the top of the box to stretch the lead to two, setting the final score to 5-3 in the process.

Dunajska Streda will fight for a chance to make into the playoffs against the Austrian team of LASK Linz on September 24 in the third round of the Europa League Qualifiers.