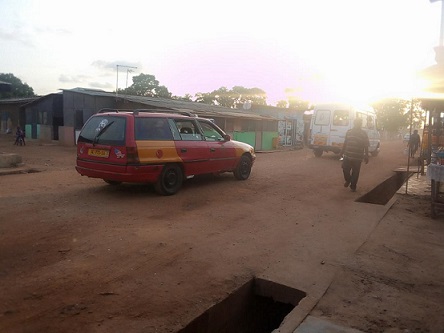 Dust emanating from the bad road linking Ashaiman Roman Down to Lebanon Zone one and two settle on goods in shops and other property along the path, thereby affecting patronage, some business operators have complained.

Speaking to the Ghana News Agency at Ashiaman near Tema, Mr Dodzi Kumaki a Fashion Designer said, due to the dust customers do not patronise the service anymore, and stitched cloths had to be washed periodically.

According to him, most inner city roads of Ashaiman were despicable with potholes and dust and linked major communities, which is eradicating their commercial activities, “we have to cover our goods to prevent the dust from entering, how can customers see what you are selling if you have to cover it?

Mr Ibrahim Sulemana a resident at Ashaiman Lebanon said, the dust was affecting their health, “lots of residents are suffering from cold, some of the people within the community are coughing, sneezing, hay fever, asthma attacks and irritation of the eyes and in the midst of COVID-19 such symptoms may be misconstrued”.

He said, the dust was causing havoc in their rooms, the exquisite features of their building alongside the road had lost its beauty.

Speaking to Mr Joseph Agbo, the Assembly member in the area, he said the Road Engineer, the Contractor and the Ashaiman Municipal Assembly had been approached to assist, but the response had not been positive and appealed to the contractor to periodically pour water on the road at least twice a day since there was a dam in the area that could be depended on for water.

Mr Joseph Commodore, the Municipal Engineer told the GNA that the Contractor had exhausted his funds, “he is soliciting money to cast the asphalt concrete’’.

He urged the residents to exercise patient, while efforts were underway to change their plight.