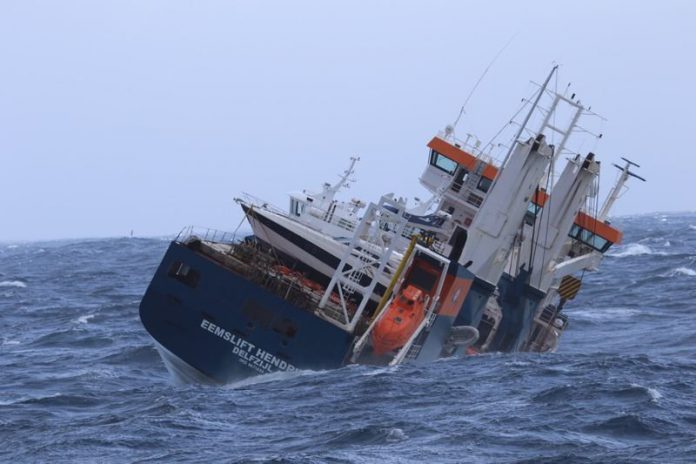 (dpa) – Rescue crews managed to board and secure an abandoned Dutch cargo ship adrift in rough waters off Norway early Thursday and prepare for it to be brought to safety, averting an oil, spill.

Rescue teams managed to get on board the Eemslift Hendrika freighter and connect the ship with two tugboats, the Norwegian Coastal Administration said. It is now being towed to the Norwegian port of Alesund.

“Salvage crews managed to get on board the drifting vessel Eemslift Hendrika and managed to connect it to the two tugboats,” the Coastal Administration said in a statement.

It was important to get the crippled vessel under control as rough seas increased the risks of that ship capsizing or hitting land.

The towing operation to bring the crippled vessel to shore from a position 10 nautical miles from the Norwegian coast had been originally postponed to Thursday due to the bad weather.

Coastal officials said that had it been left unattended, the Eemslift Hendrika might have drifted ashore in eight hours.

Officials feared that the ship could sink and spill oil into the sea. It is carrying some 350 tons of heavy fuel oil and 50 tons of diesel.

In addition to the two tugboats being sent out to the 112-metre-long vessel with the goal of pulling it ashore over the course of Wednesday, emergency personnel had also travelled to the vessel by helicopter to help attach the towlines, the administration said.

The tugs were chartered from the Dutch salvage company Smit Salvage.

Smit Salvage is a subsidiary of the company Boskalis, which handled the salvage operation of the Ever Given in the Suez Canal.

The freighter issued a distress call on Monday after running into difficult weather. Its cargo shifted, causing it to list.

The ship stabilized after the cargo was shifted back, but the 12-person crew was flown by helicopter to shore as a precaution.