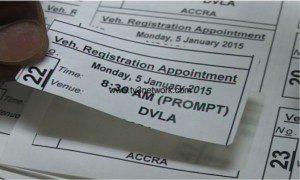 The Driver and Vehicles Licensing Authority (DVLA) says vehicles without an appointment sticker, which will be issued out, will not be registered.

This directive has been instituted to streamline the congestion that has become an annual ritual at DVLA?s headoffice at the beginning of each year as a result of drivers? desire for new number plates, an official has said.

George Ackom, the Director of Vehicle Inspection and Registration, disclosed this on TV3 on Tuesday, December 30, 2014.

According to him, the Authority will begin registering vehicles from Friday, January 2 since January 1 is a holiday.

?You will not be served if you don?t have an appointment,? Mr Ackom said.

?It is only those with appointment that will be served within the time frame.?

The appointment scheme in the form of stickers is to be issued to 24 persons per period.

He also noted that the registration fees have not changed since a revision to the fees can only be effected by an act of parliament.