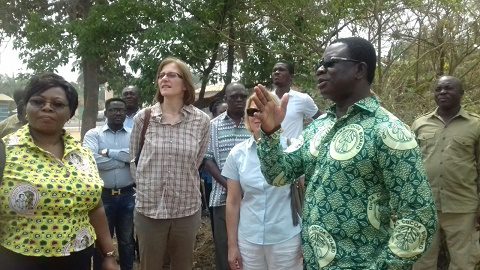 A two-member delegation from a German bank, DZ, are in the country to learn at first hand, happenings at the cocoa sector, following the bank’s decision to grant syndicated loans to the Ghana Cocoa Board (COCOBOD) for the sector.

They were led to various farms by the Chief Executive Officer of COCOBOD, with the first point of call being Brekumanso, a village in the West Akyem Municipality of the Easter Region. The area is a beneficiary of the US$750million cocoa roads.

They also saw some 27 casual labourers, who have been engaged in nursing some 400 thousand hybrid cocoa seedlings for free distribution next month.

Following an extensive explanation on the tour by Dr. Stephen Kwabena Opuni, Dagmar Werner, said she and her colleague, Priska Herz-Alfousseni, were impressed with what they saw and commended COCOBOD for it interventions.

Dagmar Werner and Priska Herz-Alfousseni, expressed satisfaction that efforts are being made for farmers to substantially benefit from their activities.

The DZ Bank -German officials, also saw how cocoa beans are nursed to seedlings, planted to yield fruits, harvested, dried and used for the various finished products such as chocolate, lotions, drinks among others.

The team also inspected a cocoa farm, as well as another nursery site at Akwadum. The bank’s delegation led by Senior Vice President, Head of Structured Trade and Commodity Finance, Dagmar Werner, was impressed with the good work of government and expressed satisfaction on initiatives by COCOBOD in particular, to better the lots of cocoa farmers.

There are 6 nursery sites in the West Akyem Municipality alone whiles the region, has 26 seedlings nursing sites.

These seedlings, have been used in Cote D’Ivoire nearly 30 years, thus accounting for their higher yields and huge cocoa revenue in the economy.

It is hoped that at the end, it will raise the annual cocoa production after it peaked at over one million tonnes in the 2010/2011 cocoa season but dropped to 850,000 tonnes in the 2014/2015 season due to the seasonal nature of the cocoa tree.

In areas where these seedlings are nursed daily by hired casual workers, boreholes have been drilled to provide water for both the community and the seedlings even during the dry season.

The initiative according to the COCOBOD has attracted some of the labourers to venture into cocoa farming after they witnessed that the seedlings they worked on are presented freely to the farmers.

Some of the roads being constructed and rehabilitated in the region include; Adeiso-Asamankese, Asamankese-Suhum, Osenase-Akwatia, Apedwa-Kyebi and Suhum-Krobiano. The bank has worked with COCOBOD over the past 20 years and according to the COCOBOD’s CEO, it has never defaulted.

The funds are being used to improve the sector, especially on deplorable roads in cocoa areas dubbed “cocoa roads” as well as COCOBOD’s commitment to freely give some 60 million hybrid seedlings to farmers this year in the six regions where the cash crop is largely grown.

According to Dr. Opuni, Over 40,000 youth are currently engaged in the cultivation of the crop in all the cocoa growing regions and is targeted at replacing the aging farming syndrome that is catching up with the sector.

The COCOBOD boss said the time has come for Ghanaians to see cocoa farming as a “business and not a way of life”, adding government was committed to provide all the incentives to attract more people into the sector.

COCOBOD scholarship Dr. Opuni said will continuously be made available to children of farmers who qualify to pursue higher learning.

Their visit was seen as very critical to COCOBOD because it will afford the visiting delegation, the opportunity to impress upon other banks in Germany to credit them with more loans for more projects.

Last year, some 25 banks in that European country came together to lend $1.8B to COCOBOD and within a period of 8 months, which is the agreed duration, COCOBOD was able to clear that debt.

Chief of Brekumanso, Nana Annor Mpere, thanked COCOBOD for benefitting from the free seedlings as well as the borehole.

This year’s distribution of the hybrid seedlings begin from March to August and farmers, who will put in request, will be provided with the free seedlings after they meet the necessary requirement of prepared land. A confident-looking Dr. Opuni assured the bank officials: “We are not going to default, COCOBOD, has an incredible track record”.

Until 2014, fertilizer was for sale except that it was subsidized, but owing to the government’s commitment to increase yield, President John Mahama, directed that the fertilizer should be given out to the farmers for free alongside the “mass cocoa spraying” exercise.

At a durbar of farmers at Akwadum, the chief of the town, Nana Osei Owusu Agyare II, aside decrying last year’s delay of seedlings and mass sparing exercise, expressed concern about how developers from the real estate business are using deception to acquire lands from them which they later sell to people for other purposes. He was happy with the new “cocoa roads” initiative and the decision to give free seedlings but asked that it should be done at the right time.

The Eastern Regional Best Farmer, Nana Obeng Akrofi expressed concerns over the destruction of lands by illegal miners popularly called “galamsey” but was assured by, Dr. Opuni said government was equally concerned about the menace and promised “we know the importance of cocoa, and so we won’t sit down and allow them to destroy the farms”.

Nana Obeng Akrofi commended government for the many interventions especially the construction of the cocoa roads, the provision of seedlings and the free fertilizer.

He, however, demanded that government needs to stop the illegal mining in the cocoa areas added that if these laudable measures are in place, it will be counterproductive to both government and the farmers if the “galamsey” menace is not curtailed.

He was, however, excited that government was doing everything possible to ensure that cocoa farmers benefit from the many interventions put in place and asked that more of the roads be constructed in his area to facilitate free transportation of the commodity to the cities.