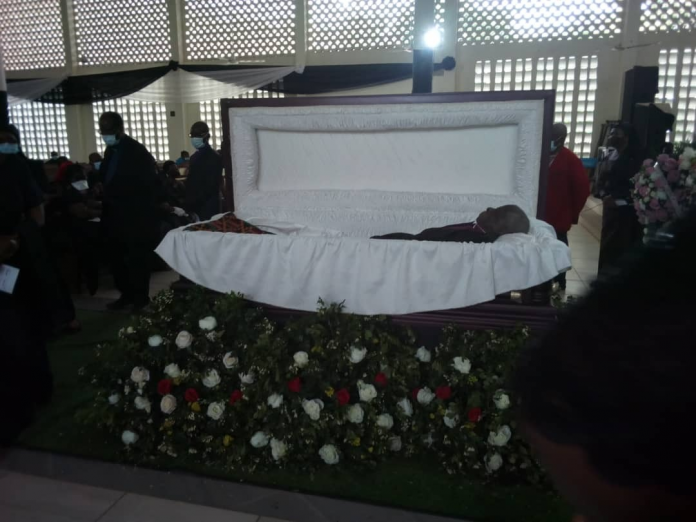 A pre-burial service was Friday held at the Evangelical Presbyterian Church, Dela Cathedral at Ho Kpodzi for the late Very Reverend Dr Livingstone Komla Buama, the last Moderator of the Synodal system of the Church.

The casket containing his mortal remains was placed at the Cathedral to allow the public to pay their last respects.

Tributes that poured in described the late Moderator as affable, selfless, dedicated, and upright, a visionary and a father of the fatherless.

Very Rev. Japhet Ledo, a former Moderator of the Church, in his tribute, said the late Moderator sacrificed his life for the Church.

Rt. Rev. Dr Hilliard Dogbey, Presiding Bishop of the A.M.E. Zion Church, described Very Rev. Dr Buama as a pillar of strength, who sacrificed for others to succeed.
He said his leadership style was par excellent.

Rev. Frank Kwame Anku, who was the Synod Clerk during Very Rev. Dr Buama’s tenure of office, in a tribute described him as a powerful leader, who impacted positively on many lives.

Rev. Dr Cyril Fayose, General Secretary of the Christian Council of Ghana, said the late Moderator was a role model to many.

Rev. Dr Vivian Balasu-Addo, Moderator of Ho East Presbytery Moderator of the Church, in a sermon on the theme: “I will see God” said life was a journey that would one day end.

Rev. Balasu-Addo said the late Moderator needed to be celebrated because his life touched so many people and urged all to emulate him.

The burial service for the late Moderator will be held at the same Cathedral tomorrow after which his mortal remains will be interred at Klefe Kpodzi, his hometown.

He left behind his wife Mrs Janet Buama and four children.