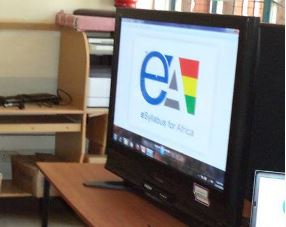 They are Daniel Arthur, 30, and Leticia Adu 19, both from the Oti Boateng Senior High School in Koforidua, who were selected after a Mathematics and Science test contested by over 120 students from the Eastern and Volta Regions. The scholarship would assist the beneficiaries to purchase admission forms of any tertiary institution of their choice, a bursary of 750 dollars each academic year and all other costs relating to their education.

Mr John Akwetey, the Eastern Regional Director of E-syllabus for Africa, said the competition was instituted by the organisation, two years ago, as a platform to identify brilliant students in the Sciences but who needed assistance.

He said the objective was to encourage the study of Mathematics and Science. About 12 students have benefited from the scheme since its inception.

Mr Arthur told the Ghana News Agency that he completed Senior High School in 2007, but he had not been able to continue due to financial difficulties.

The visibly elated Mr Arthur said with the sponsorship, he was hopeful to achieve his childhood dream of becoming a medical doctor and thanked those who helped him to participate in the competition.