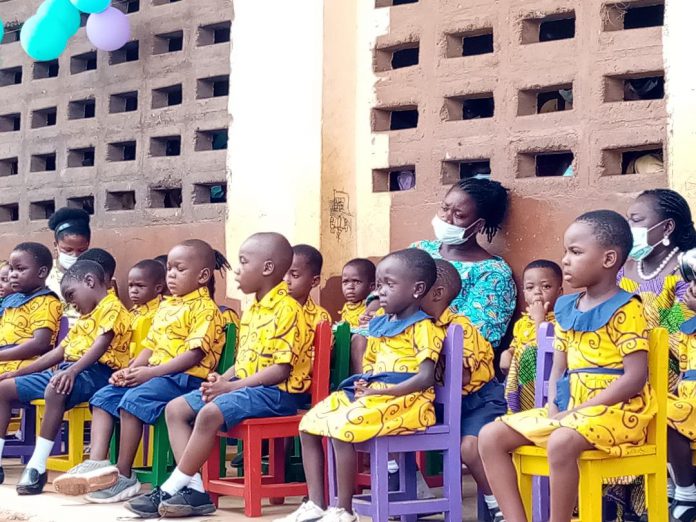 It is a known fact that education is the driving force behind nation-building and that it is at the heart of enlightenment, prosperity and success of individuals and nations alike, she said.

Madam Kaba said this during the handing over ceremony of a renovated Kindergarten Block by KPMG to the Abelenkpe Basic 1 School.

She stated that without a strong foundation at the formative ages of a child’s education, children were most likely to miss out on the benefits that quality education offered.

Madam Kaba stressed that early childhood care and education was very vital to the holistic development of a child’s social, emotional, cognitive and physical needs.

“Research shows that investment in early childhood education improves not only children’s mental abilities but also their critical behavioural traits such as, discovery, creative thinking, self-esteem, sociability and motivation to explore the world around them,” she stated.

She said the provision of a strong base for a lifelong education and wellbeing should be a shared mandate of the government, citizens and other partners.

Madam Kaba added that every individual had a role to play in that regard and commended KPMG for its kind gesture to create a conducive atmosphere to groom the young generation, by providing facilities that met the educational need of children.

She said that the structure came in handy at a point where the Early Childhood Education Policy had been passed by Parliament.

Madam Kaba said the two-year education policy was part of the Government’s commitment to free and compulsory basic education and that the policy recognised the benefits of early childhood education.

She said the Policy was also in pursuance of the Sustainable Development Goals (SDG) Goal 4.2 which specifically sought to ensure that by 2030 all girls and boys would access quality education.

Madam Kaba urged other individuals and corporate bodies to take a clue from KPMG and replicate the gesture in other places across the country.

Mr Anthony Sarpong, Senior partner of KPMG, said the policy of the KPMG was to share a common purpose on how to strengthen communities as a united force to tackle the world’s greatest crisis.

He stated that the organisation sought to foster partnership with government to make Ghanaian communities better.

“Education is critical to our nation’s development and it is of essence that our children are given the firm foundation that they will require at their early stages, ”he stated.

Mr Sarpong said that the KPMG had supported various institutions, including Abelenkpe “1” primary and kindergarten.

Mr Sarpong said their organisation discovered the deplorable state of the Basic “1” kindergarten a year ago and had voluntarily made contributions to renovate these classrooms.

He said that the KPMG as an organisation was committed to the cause of education as a means of lifting millions of the country’s population out of poverty.

Mrs Mercy Awuah Addo, Headmistress of the Abelenkpe Basic “1” School, thanked KPMG for the support to renovate the kindergarten classrooms, adding that, admission had increased from 7 to 50 pupils after the renovation.

She called on government and other Organisations to support the school.