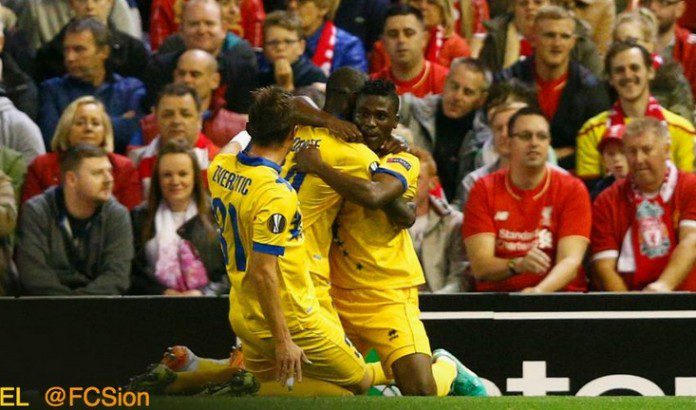 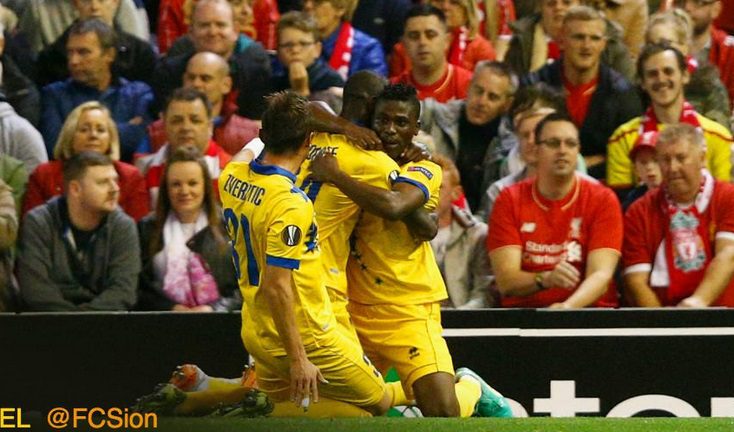 Ebenezer Assifuah celebrates his goal for FC Sion against Liverpool

Ghana international attacker Ebenezer Assifuah dominated the headlines at Anfield after scoring the equaliser for Swiss side FC Sion in their 1-1 stalemate with Liverpool in the Uefa Europa League on Thursday evening.

The 22-year-old former FIFA U20 World Cup Golden Shoe Award winner raced swiftly through the Liverpool back to break the Reds defence and cancelled out an Adam Lallana early opener.

Assifuah?s 18th minute stood as the English giants failed to restore their lead before the break. Adam Lallana had scored first to sent the Anfield population into jubilant mood relishing a victorious night over the Swiss Super League title-contenders.

But Assifuah employed his quick feet to elude Jordan Ibe on the right before approaching the Liverpool box with full confidence and slotting the ball in between the legs of Mignolet ? the Liverpool keeper.

Sion returned from the break to pile more pressure on the host and Assifuah could have won the game for the visits in the 68th minute following yet another frantic move on the right. He broke free from two Liverpool defenders, held the ball inside the box at his will before hammering a shot at goal but Mignolet thwarted it away.

Liverpool created a host of chances but in an intensified second-half exchanged but Sion held on and resisted efforts from Philip Coutinho and Origi.

The goal is his first of the competition for Sion and his second of the season.