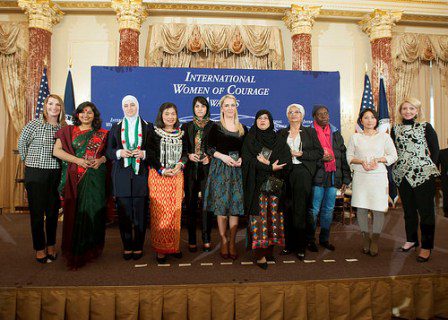 A Guinean woman, who is an Ebola survivor and activist, is one of 10 women worldwide that were awarded by the United States in Washington, DC, with the US International Women of Courage Awards as part of celebrations that marked the 2015 International Women’s Day. The US Secretary of State?s International Women of Courage Award annually recognises women around the globe who have demonstrated exceptional courage and leadership in advocating for peace, justice, human rights, gender equality and women?s empowerment, often at great personal risk. The award stated in 2007 and since then, the Department of State has honoured 86 women from more than 50 different countries.

Ms. Marie Claire Tchecola is a nurse in the Guinean capital of Conakry. She was exposed to the Ebola virus July last year when treating an Ebola patient in a Conakry hospital. But she survived the virus after identifying the symptoms herself and quickly checking into a treatment centre where she recovered and has since become an active Ebola activist.

Battling fear and stigma over Ebola, including being forced by her landlord to leave her own home, Tchecola returned to her work, after recovery, caring for the sick as an emergency room nurse at Conakry?s Donka Hospital.

As an active member of the Ebola Survivors Association of Guinea, she is committed to speaking out publically about Ebola to spread awareness about the disease and to fight stigmatization against survivors. And it is her great courage to return to work, after her recovery, in helping Ebola victims and helping to fight the disease, which is remarkable and saw her recognised for this award.

The award, given on March 6, means so much to her and has greatly encouraged her to continue to fight for a free-Ebola Guinea.

“It (the award) represents strength and courage. It means continue to do your work (Ebola activism). That’s it for me – strength and courage no matter what confronts you,” Tchecola told me in New York of the importance of the award and what it means to her through an interpreter who works with the US Department of State.

She continued: “Ebola means stigmatisation and so on and this prize helps me not to discourage. Continue to do your work.”

Although the Ebola crisis has lowered in Guinea, according to Tchecola, she intends increasing her work in the eradication of the disease in her country when she returns to Guinea following her award in the US.

“However, I want to continue with the same work with great courage, educate the people and bear witness. I have another project in relation to Ebola – I want to do it with great importance.”

Ms. Tchecola was one of the two Africans awarded. The other was Ms. Beatrice Epaye of Central African Republic who couldn?t attend to receive her award. The list of 10 women also included two journalists Ms. Nadia Sharmeen, from Bangladesh, and Ms. Arbana Xharra, from Kosovo.

After receiving their awards from Deputy Secretary of State Heather Higginbottom, the honourees had meetings with U.S. government officials and non-governmental organization counterparts in Washington, D.C. and then traveled individually to cities across the United States to participate in professional meetings and events, and engage with the American people through an International Visitor Leadership Program. They visited Atlanta, Chicago, Des Moines, Indianapolis, Kansas City, Los Angeles, Pensacola, Pittsburgh, and San Diego.

The award winners reconvened in New York City last two weeks to participate in the 59th Session of the UN Commission on the Status of Women, reflect on their visit, and discuss ways to work together to improve the lives of women and girls around the world.