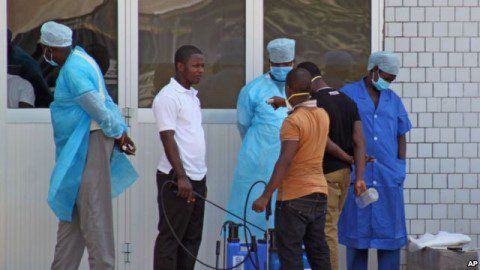 The death toll from the Ebola outbreak in West Africa has risen to 83. The World Health Organization says all 83 deaths have occurred in Guinea, where there are a total 127 suspected and confirmed cases of the disease.

It says the case number includes 14 health care workers, eight of whom have died.

The WHO says there are also eight suspected and confirmed Ebola cases in neighboring Liberia. It says the person whose diagnosis was confirmed by lab results has been put in isolation, and the people she had contact with are under medical observation.

Ebola is a highly infectious disease, spread mainly through contact with bodily fluids.

Health experts are warning people in the affected areas to wash their hands and avoid contact with Ebola victims in order to keep the disease from spreading.

The outbreak began in southeastern Guinea in February. The first cases in Guinea?s capital, Conakry, were confirmed last week.

Last Saturday, Senegal closed the land border it shares with Guinea as a preventative measure.