Mrs Jean Mensa, the Chairperson of the Electoral Commission, has said that all six proposed regions in the December 27 Referendum have met the constitutional threshold of 50 per cent voter turnout and 80 per cent voting “Yes”.

Mrs Mensa said this on Friday at a press briefing in Accra to make the results known to the people of Ghana as declared by the six regional returning officers of the proposed regions; Western North, Oti, Ahafo, Bono East, Savannah and North East.

Mrs Mensa said the percentage of Yes votes for the Western North was 99.51, declaring that the indicator, therefore, showed that Western North passed the test for the creation of a new region.

Mrs Mensa said the percentage of 99.68 Yes votes signalled that Ahafo had also passed the test for the creation of a new region.

“Therefore, the percentage of Yes Votes stands at 99.50 (per cent). And I am happy to announce that Bono East also passed the test.”

“As such the percentage of Yes Votes stands at 99.52 per cent. I am happy to announce that Savannah also passed the test.”

The percentage of those who voted Yes for North East was 99.67 (per cent), hence, North East Region also passed the test, Mrs Mensa said.

She noted that the results of the referendum would be gazetted, after which it would be presented to the President. 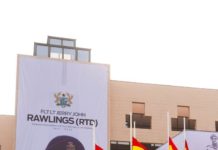