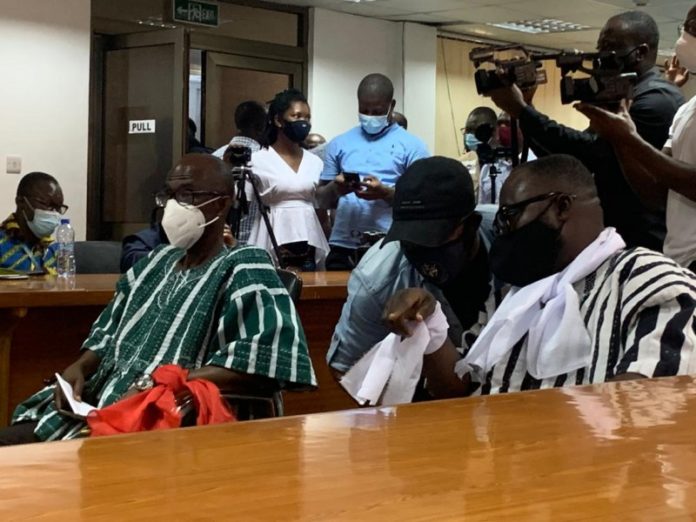 The National Democratic Congress (NDC) has accused the Electoral Commission of imposing challenges on the Party hence its inability to file the nomination at 1100hours as earlier promised.

The NDC said the decision by the EC to use a provisional register for the filing process instead of a certified one accounted for the delay of nomination submission.

The Electoral Commission, however, debunked the claims that the Commission was to blame for the errors detected in the Identity Cards and on the forms because all the minor errors were corrected and the political parties were notified in writing 10 days before the filing of nomination.

Mr Johnson Asiedu Nketia, the General Secretary of the NDC, after presenting the nomination forms, said: “If the EC had used the old voters register the party wouldn’t have faced the situation where the EC detected mistakes and recall the identity cards of some voters who had endorsed the forms for their presidential candidate.”

He blamed the flaws in the register on the hurried nature by which the EC conducted the compilation saying: “As at today that we are filing the nomination forms, the EC is displaying provisional register”.

He said the nomination forms contained mistakes and that the PNDC Law, which was quoted on the form, had been repealed.

Mr Asideu Nketia said the challenges the EC was facing had vindicated the NDC’s position that time was not on the side on the Commission to compile a new register.

“Is it not strange that a certified register that is critical for the filing of the nomination is not ready while the process of nomination are on-going?” he asked.

Dr Bossman Eric Asare, the Deputy Commissioner in Charge of Corporate Service, said it was misleading for the NDC to claim that the EC was using a repealed law, noting that C.I.127 mandated the EC to use a provisional register for the filing process.

He described as strange the accusation being levelled against the EC by the NDC since the four other aspirants, who had earlier filed their nomination, did not raise any issues with the process.

He reiterated the determination and resolve of the Commission to run a credible election based on integrity and transparency.

“I can assure all Ghanaians that the process and the conduct of the elections will be the best in the history of the country,” he added.

Just as the Deputy Commissioner was clarifying the issue to the NDC, the delegation staged a walkout while singing redemption songs.