The Alliance Ghana Movement of Change (CPAG MoC) has issued a communique to the Electoral Commission calling on the EC to exercise its powers in respect of the declaration of assets, liabilities, and audited accounts by political parties.


Below is the full details of the communique.

REQUEST FOR THE ELECTORAL COMMISSION TO EXERCISE ITS POWERS IN RESPECT OF THE DECLARATION OF ASSETS, EXPENDITURE, LIABILITIES, AND AUDITED ACCOUNTS BY POLITICAL PARTIES.

Introduction:
Common Purpose Alliance, Ghana Movement of Change (CPAG MoC) and the entire membership of Common Purpose Alliance, Ghana wish to call on the Electoral Commission of Ghana (EC) to exercise its regulatory powers over political parties as envisioned by the 1992 Constitution and the Political Parties Law, Act 574, (2000), and compel all political parties to declare their assets, expenditure, liabilities, and audited accounts, and cause same to be published for the benefit of the good people of Ghana. We refer specifically to Part II ? Operation of Political Parties, sections 13 & 14 of the Act which deals with declaration of assets and expenditure by political parties, and declaration of assets, liabilities, and expenditures in relation to elections.
CPAG is a duly incorporated Civil Society Organization under the laws of the Republic of Ghana hence we make this call in line with our objective to promote transparency and accountability, and good governance in general.

The EC, Political Parties, and the Law;

As you are aware, under the constitution and Act 574, all political parties are under obligation to run their internal organization in conformity with democratic principles, and their actions and purposes shall not contravene or be inconsistent with the constitution or the Act.

Further, Section 13 of Act 574 enjoins all Political Parties to submit to the Commission within thirty days after the issue to it a final certificate of registration under section 11 or such longer period as the Commission may allow, a written declaration giving details of all its assets and expenditure including contributions or donation in cash or in kind made to the initial assets of the Political Party.

Also, all parties shall state the sources of funds and other assets of the Political Party. The Commission is enjoined by law to cause such declarations to be published in the Gazette within thirty days of its receipt.

Sections 13 (6) (a) & (b) of the law further states in clear and unambiguous language that any Political Party which refuses or neglects to comply with the provisions of the law or submits a declaration which is false in any material particular, may have its registration cancelled by the Commission.

Again, Sections 14 (a) & (b) of the law stipulates that the Commission may cancel the registration of any Political Party which refuses or neglects to comply, or submits a statement which is false in any material particular.

It is clear that the purpose of Article 55 of the Constitution as well as Sections 13 and 14 of Act 574 is to ensure that there is transparency and accountability in the organization and conduct of Political Parties, and also to ensure that Political Parties are not funded through illegal sources and by individuals who engage in illegal businesses.

For all intends and purposes, the Constitution and Act 574 are safeguards against any act or conduct which may potentially breed political corruption.

In the face of recent media reports that the Commission has threatened to crack the whip on Parties which have fail to abide by the provisions of Section 9 (c) of Act 574, we find it curious and rather worrying that the Commission is not pushing for the full implementation of Article 55 (a) and (b) of the Constitution, and Sections 13 and 14 of Act 574.

By this communiqu?, CPAG MoC puts you on notice that, a failure by the Commission to comply with the demands above will constitute a refusal to act, which we shall contend, is a manifest dereliction of your duties as a Commission. Take notice, and notice is hereby served, that CPAG MoC shall take all available legal options to compel the Commission and Political Parties to respect the Constitution and Act 574.

Please acknowledge receipt of this communiqu? within seven days. 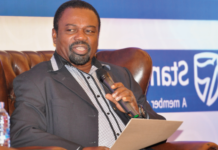