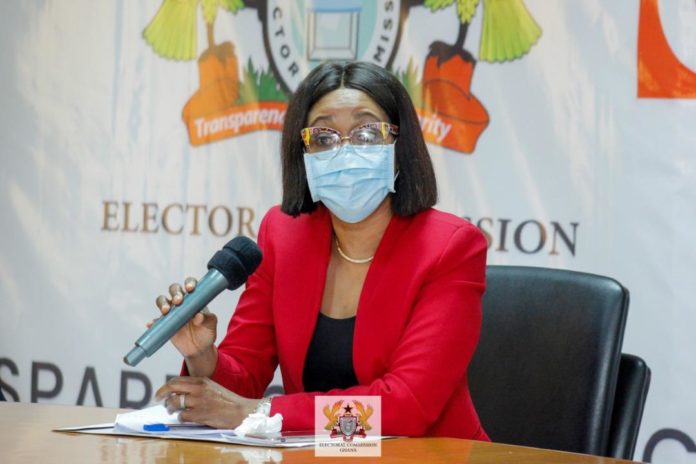 Mrs Jean Mensa, the Chairperson of the Electoral Commission, on Wednesday said the Commission has put in place rigorous measures to ensure that prospective applicants observe all the COVID-19 protocols at the Voters Registration Centres.

Responding to a question from a journalist at the sixth edition of the “Let The Citizen Know,” series in Accra, she said it was unfortunate that former President John Dramani Mahama had to abandon his monitoring of the registration centres due to poor adherence to safety protocols.

She stated that it would be helpful if former President Mahama could furnish the EC with the details of areas he visited where the safety protocols were been breached to enable the Commission to take steps to deal with it.

“We have put in place stringent COVID-19 protocols that are being observed at most of the centers, except that there were few breaches in Ashaiman, Accra Central, and Tema at the beginning of the process.

“The Commission required every eligible applicant to wear a face mask, wash hands at the centre and sanitize his or her hands. To a large extent, 98 per cent of the centres are adhering to the protocols with a few areas where the protocols were been flouted.”

As part of measures to ensure that the protocols are observed, Mrs Mensa said the Commission was embarking on public education in all the local languages and charged members of the public to also play their part by adhering to the protocols.

She expressed gratitude to institutions including the religious bodies for educating their congregants on the anti-COVID-19 pandemic protocols.

Mrs Mensa said overcrowding has reduced at the registration centres with the introduction of the mobile teams and the queue management systems and urged prospective applicants to cooperate with the EC to ensure a successful exercise.

Touching on the agitation for the payment of allowances to temporary officials, she said as far as the Commission was concern there were no issues saying that the terms of engagement had been spelt out in their appointment letters.

She said all the temporary officials who participated in the 2019 District Level Elections had been paid, adding that the few cases that were pending were as a result of inaccurate bank account details provided by the officials.