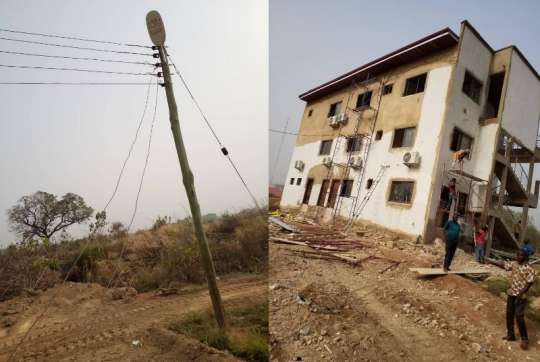 The Electricity Company of Ghana (ECG) has uncovered an illegal connection of power from the national grid to new two storey building in Dambai in the Oti Region, which houses a radio station.

Mr Benjamin Antwi, Public Relations Officer (PRO) of the Volta Regional Office of the ECG who disclosed this to the Ghana News Agency (GNA), said the power theft was discovered at about 1500 hours on Wednesday.

He said Mr William Addy, Regional Revenue Protection Manager who dispatched a team from the Revenue Protection Division to monitor the installation of equipment for customers in Dambai, discovered a direct power connection from an ECG pole to the building.

The PRO said checks from the ECG database indicated that no application had been tendered for power, yet the building had lights, and seven air conditioners functioning, whiles the transmitters of the radio station- Kanor FM, had also been powered.

He said arrests were yet to be made, but owners of the facility had been surcharged an amount of GHC 38,000.00, and added that the case would be forwarded to the police.

Mr Antwi said power supply to the building had been curtailed, investigations ongoing to arrests the main culprits, and appealed to the public for relevant information on such activities, saying a six per cent compensation awaited whistle blowers.

The PRO also cautioned the public against illegal connections and power thefts, saying it denied the nation of revenue, and thus stifled national development.

He further called for proper fire control measures when starting fires particularly during the dry season, and also appealed to farmers to help protect electricity poles when burning fallow lands.

“Our poles are getting damaged by fire, so we would appeal to our farmers to apply fire control measures when burning bushes ahead of the farming season.