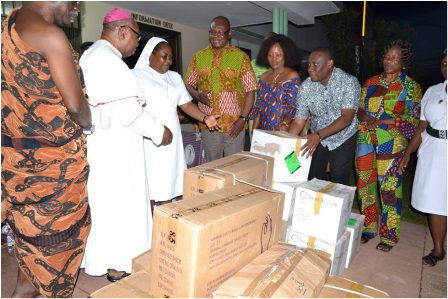 The Chief of Staff, Prosper Bani, has assured Ghanaians that President Mahama is working hard to change the Economic Fortunes of the Country. He laid out Health, infrastructural development, ?Education, Investments, among others, as critical areas that have received attention by the government for economic transformation.

The Chief of staff said this yesterday when he donated medical supplies to the Margaret Marquart Catholic Hospital at Kpando in the Volta Region.

According to him, President Mahama was committed to ensuring that Health provision in the country was improved to serve the citizenry especially the vulnerable.

He noted that, the country had gone through a very turbulent period in recent times explaining that ?it?s not as a result of lack of effective policies or programmes but a combination of challenging factors that has resulted in the painful economic situation that we have today?. Mr Bani, however, assured that President Mahama and his team were committed to working hard, which he observed, has resulted in the transformation that is currently going on in every sector of the Economy.

Touching on development efforts by the government to residents of the Kpando Municipality, the Chief of Staff hinted that, the Have to Kpando road had been awarded on contract.

He said, he was currently negotiating with the Minister responsible for Roads,was to help refurbish the Kuenda to Alavanyo and Nkonya including Wegbe to join the Eastern Corridor road that will ensure easy movement of people and economic transformation in the area.

Additionally, construction of a 7 kilometer road within the Kpando township had also been awarded on contract, assuring that construction would soon begin to open up the Municipality. He added that,?these are concrete things that you will begin to feel in the next couple of months?

Mr Prosper Bani used the occasion to educate the residents about the need to keep their environment clean in order to avoid spreading Cholera in their various communities.

On Ebola, he cautioned the people to be vigilant against the risk factors associated with the Virus, and advised Ghanaians, who travel to Ebola affected countries, to seek medical care as soon as they return into the country.
The medical superintendent of the Margret Marquart Hospital Rev. Sister Dr Lucy Hometowu appealed to the government to assist the Hospital to acquire accreditation to start a Nursing Training School at the Hospital.

She said, the Hospital was currently under going renovation and expansion of the Out Patient Departments, the accident and emergency ward among other structures to meet the high patient turn out at the Hospital.
The Chief of Staff Mr Bani, was accompanied by the Volta regional Minister, Helen Ntoso and her Deputy Francis Ganyaglo, and later toured the Hospital.