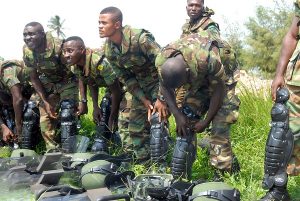 About 205 Ghanaian soldiers have been deployed to  the Gambia to augment a contingent from other West African countries to capture Yahya Jammeh whose tenure of office expired last night.

Acting Director of Communications at the Presidency Eugene Arhin who issued a release in that regard on Wednesday night, said “ECOWAS has decided as a result of the refusal of President Yahaha Jammeh to accept the verdict of the Gambian people in the elections of December 1, 2016, to deploy troops from its member states to The Gambia with immediate effect.”

“The objective of is to create an enabling environment doe the effective enforcement of the rule of law, and, in accordance with the Constitution of The Gambia, facilitate the inauguration of the President-Elect, Adama Barrow, on Thursday, January 19, 2017. the statement concluded.