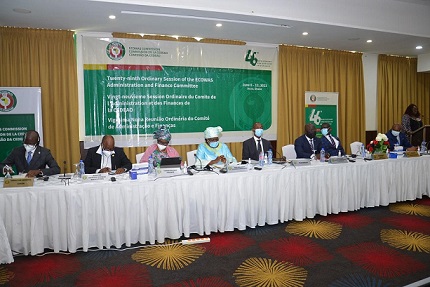 The 29th Ordinary Session of the Administrative and Finance Committee (AFC) of the Economic Community of West African States (ECOWAS) is underway in Accra.

The four-day meeting will, among other things, focus on ECOWAS mid-year budgetary review, appropriations and endorsement of the work programmes of all ECOWAS Institutions and Agencies.

It is being attended by participants from the 15 member states of ECOWAS with the exception of Mali, which was recently suspended from the regional body due to a military coup.

Mr Nurudeen Ismaila, Chairman, ECOWAS AFC, said the Accra meeting, which comes closely on the heels of two consecutive virtual meetings of the AFC, offered a unique opportunity to discuss financial and administrative issues relevant to the regional body.

He said the meetings were indispensable in ensuring that financial and administration questions pertinent to the regional body were given the due consideration for the progress of ECOWAS and the development of the region.

He said as the meeting reviewed financial situation of ECOWAS, and consider other matters of regional relevance, there was the need to consider effective financial and administrative services within the various institutions and agencies.

He urged the participants to be mindful of the effects of the Covid-19 on the sub-region as they worked to attain the objectives of ECOWAS.

Mr Ismaila said the pandemic had adversely affected countries in the bloc and that efforts to fight the pandemic further plunged the economies into severe recessions.

He said to this end, the decisions and recommendations of AFC would be guided by the realities of their times.

He said the ongoing ECOWAS institutional reforms held significant promise of ushering ECOWAS into a new era of hope, productivity and cost efficiency.

Mr Ismaila said in the eyes of community citizens, ECOWAS should be seen as regional body which was working for their good and prosperity and nothing other than that.

He lauded ECOWAS for the renewal of the tenure of President Nana Addo Dankwa Akufo-Addo as Chairman of ECOWAS Authority of Heads of States and Governments for the next one year.

He also lauded Benin and Cape Verde for their conduct of free, fair and transparent presidential and parliamentary elections in April this year.

He said despite the considerable progress by the region in consolidating democratic gains, news of the recent coup d’état in Mali dealt an enormous blow to the collective democratic gain of ECOWAS citizens.

He said it was his hope and aspiration that the Mali situation would be resolved within the shortest possible time.

Madam Finda Koroma, ECOWAS Vice President, commended President Nana Addo Dankwa Akufo-Addo, Chairman, ECOWAS Authority of Heads and Governments, and Madam Shirley Ayorkor Botchwey, Minister of Foreign Affairs and Regional Integration, and Chairperson of the ECOWAS Council of Ministers for the extra -ordinary leadership they had provided for the Community at this very difficult time.

“It is a testimony of their unwavering commitment to the regional integration,” she said.

Madam Halima Ahmed, ECOWAS Commissioner of Finance, said the backlog of unprepared audited accounts had been dealt with, adding that “we are now up-to-date with our audited financial statements, as well as audit recommendations and management action plans.

Mr Vafokay Mbande Toulay, ECOWAS Commissioner for General Administration and Conference, said the role of the AFC was very critical in the decision-making process of ECOWAS.

He said the COVID-19 pandemic had led to ECOWAS adopting virtual meetings for some of its conferences, which was challenging but had also led to some savings for the Community.