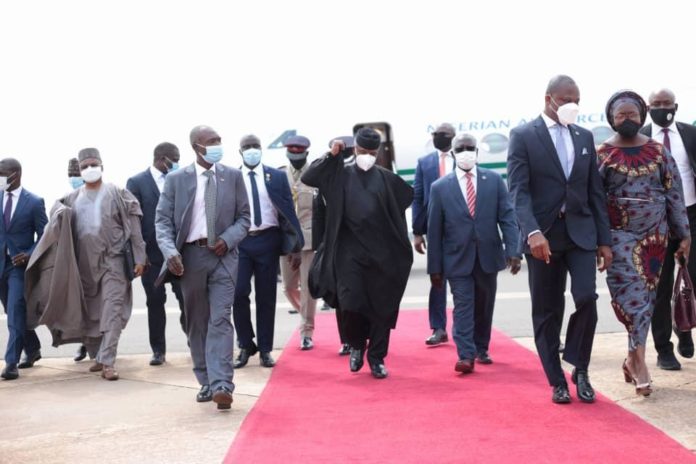 The Authority of Heads of State and Government of the Economic Community of West African States (ECOWAS) Saturday shelved for a month its decision on post-coup sanctions against the military authorities in Mali, Guinea and Burkina Faso.

At an Extraordinary Meeting of the 15-member bloc in Accra, the West African leaders who could not agree on actions against the Junta in the three countries, said they hoped to take a firmer stance on the sanctions at its next summit on July 3, 2022.

The Accra meeting was called to discuss challenges confronting the three nations in the light of developments within the regional and global context, after the raft of sanctions placed on them following the overthrow of their constitutionally elected governments.

The military Junta in the three countries, who have been suspended from the regional bloc, with Mali under the severest sanctions, including financial squeeze, travel bans and border blockade, have suggested terms of between 24 and 36 months to relinquish power to civilian authorities.

But experts say the sanctions, coupled with jihadist insurgency and Russia’s invasion of Ukraine, is contributing to worsening living conditions for the people in those three nations.

The Accra meeting demanded that the three junta-led countries finalise an acceptable transition timetable and establish an appropriate framework for dialogue with political and civil society stakeholders in order to ease the socio-political tension and ensure a peaceful transition.

The leaders also urged the authorities in the three countries to take steps to enhance security in their respective countries and to respect the human rights of all citizens and desist from arbitrary acts that undermine the rule of law.

On Burkina Faso, the meeting took note of the efforts made by the transition authorities on the security front and encouraged the Junta to “sustain the momentum towards further enhancing security in the country.”

The leaders expressed grave concern about the deteriorating humanitarian situation in that country and called on the International Community to strengthen its humanitarian support to Burkina Faso.

On Mali, the bloc urged a quick return to constitutional order in accordance with the ECOWAS and African Union protocols and decisions.

It upheld the sanctions imposed on January 9, 2022, and said those retaliatory measures would examine on July 3, 2022, and be lifted gradually when benchmarks of the transition are met.

On Guinea, ECOWAS expressed serious concern over the deteriorating socio-political situation and urged the transition authorities to create a suitable framework for all stakeholders to dialogue in order to ensure a peaceful transtion processes.

Ghana and Burkina Faso to promote trade and commerce