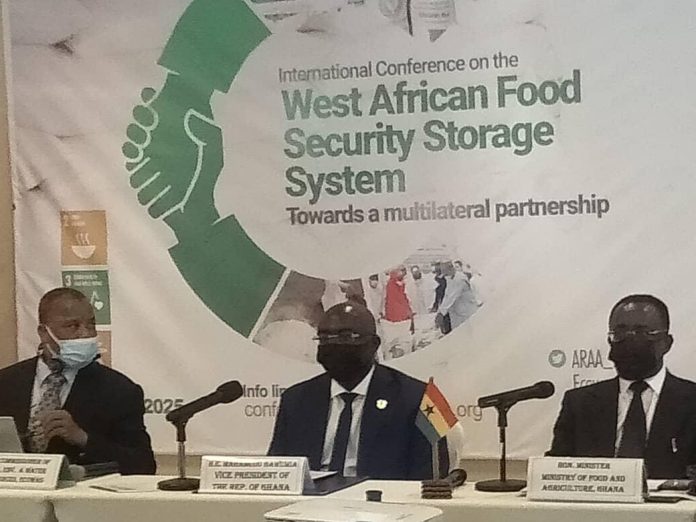 Vice President Dr Mahamudu Bawumia says due to the strong linkages of the economies of the West African countries, it is imperative to build synergies in common areas of clear comparative advantage towards achieving strategic food security systems.

He has therefore called for stronger integration of the ECOWAS markets in order to build the necessary resilience of their economies and food security system.

“Our plan to build a strategic food storage system for the subregion is a step in the right direction towards addressing the dire situation of emerging hunger facing our people.

“In order to operationalize our objective, there is an urgent need for marching resources and financing mechanism,” Dr Bawumia said.

Vice President Bawumia made the call at the closing ceremony of the international conference on West African Food Security Storage System in Accra.

The meeting started from April 28 to May 10, attracted ministers in charge of Agriculture, Environment and Water Resources from 15 West African countries as well as donor partners to deliberate on measures to achieve regional food security.

It was organized by the Economic Community of West African Agricultural Policy (ECOWAP) Donor Group, with the key objective of implementing the agricultural component of NEPAD in West Africa.

The meeting called for an action to share country experiences, knowledge and building consensus on the way forward, to build strategic stock reserves in the sub-region.

Vice President Bawumia said the meeting was a giant step in the ECOWAS’ quest to provide food security especially for the vulnerable, and a good sign of being responsive to the needs of the people.

“In a short to medium term goal was to build capacity of the subregion and insulate our system from external shocks and attain self-sufficiency,” Dr Bawumia said.

The Vice President indicated that the meeting aligned with the government of Ghana’s efforts of revamping agriculture and harnessing her potential to the fullest.

“We’re therefore in full support of the sub-regional effort to build strategic stocks of food reserves and to ensure food security in the subregion,” Dr Bawumia said.

“For us in Ghana, the purpose of this conference vindicates our government’s transformation agenda rolled out in 2017 for the agricultural sector.

” The agenda is a product of a comprehensive diagnosis of the agricultural sector and the vehicle for delivering on the agenda is government’s flagship programme known as Planting for Food and Jobs (PFJ).

“The key focus of the programme is to enhance productivity, scale up production of food commodities, promote value addition and build sustainable food security for the country,” he stated.

To this end, he said, Ghana had invested consistently and progressively through many complementary interventions including annual distribution of subsidized farm inputs, certified seeds and fertilizers.

Other interventions were the development of agriculture infrastructure by way of warehouses, greenhouse technology villages, feeder roads and irrigation schemes.

For instance, he said, the Ghana Commodity Exchange was a platform for providing a link between buyers and sellers in the food and raw material value chain.

He said the Planting for Exports and Rural Development (PERD) programme was one of five modules of the government’s flagship programme for Planting for Food and Jobs.

Dr Bawumia said in four years of implementing the PFJ programme, impressive successes had been recorded.

These included an increase in farmer participation from 202,000 to 1,500,000 in 2020, the distribution of 14 million seedlings raised locally to 65,474 farmers to boost the production and exports of selected tree crops.

He said the construction of three greenhouse technology centres in different parts of the country to promote the production of high value vegetables for local consumption and exports, and construction of 80 warehouses under a one district one warehouse initiative, of which 60 of them were ready to be put into operation was all to ensure food security.

“In achieving our strategic objective of transforming Ghana’s agriculture and attaining sustainable food security is not without challenges. Key among them are financing, floods, drought, pest and disease, climate change variabilities, and post-harvest losses.

“Admittedly these challenges are common to countries in the sub region, some because of the shared geography and shared environment. And this is the more reason for a concerted effort to strategize against the threats posed by these factors” Dr Bawumia said.

Statistics over the past seven years suggests that people facing food insecurity in the sub region has exploded from two million to 27 million as at the end of the last cropping season.

The Vice President said the aforementioned statistics were unacceptable especially when agriculture offers the best hope of liberating the economies of the sub-region from the chronic malaise that had characterized them over the years.

“We all know that our countries are endowed with virtually all the resources needed to propel economic development,” he said.