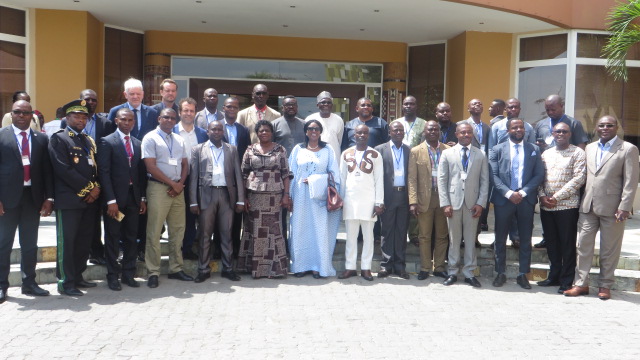 Ghana has urged members of the Economic Community of West African States (ECOWAS) to show commitment to a borderless sub-region.

Mr Ambrose Dery, the Minister of the Interior, who made the call, said the rationale for forming ECOWAS, which was a borderless West Africa, still remained relevant and requested member countries to show commitment to give effect to the free movement of persons and goods.

Mr Dery made the appeal on Monday in a speech read on his behalf at the opening of the Training of Trainers Workshop on the ECOWAS Regional Border Management Training and Free Movement Manual in Accra.

He said in as much as all member countries believed there were a lot of socio-economic benefits to be derived from ECOWAS, implementation of some of the protocols had not been successful as member states would have wished.

“Undoubtedly, the success of ECOWAS is hinged greatly on its flagship protocol, that is Free Movement of Persons, Rights of Residence and Establishment, which is aimed at encouraging free mobility of persons and goods within the sub-region through the elimination of obstacles to free movement by Member States,” he said.

“This protocol has, indeed, led to the adoption of other related initiatives by member states including the abolition of entry visas; resident card, use of standardised ECOWAS Travel Certificate; Usage of ECOWAS Passport (which 14 out of the 15 Member States are using) and the implementation of the Brown Card Motor Vehicle Insurance Scheme,” Mr Dery said.

The four-day workshop, the first in the series of three, is for selected trainers of border officials from five ECOWAS member countries namely Ghana, Nigeria, Togo, Benin and Niger.

It is being supported by the Demand Driven Facility implemented by the International Centre for Migration Policy Development within the framework of the EU-ECOWAS support of Free Movement of Persons and Migration in West Africa Project.

Five participants from each member state are expected to plan and execute a step down training for cadet officers at the National Training academies at the end of the workshop.

Mr Dery said Ghana is committed to facilitating free movement of goods and persons within the ECOWAS sub-region and in that direction began a 24-hour border opening at its major borders; Aflao, Akanu-Nuepe, Paga and Elubo.

Also, a number of minor border posts along the eastern border namely: Have, Batume Junction, Kpoglo and Agortime Afegame have been opened for operations.

The Minister said whilst it was good to applaud the successes derived so far from the implementation of the protocol on free movement; “we cannot lose sight of its attendant dangers”.

He said the recent attacks by insurgents in Mali, the Ivory Coast and recently Burkina Faso as well as the perpetuation of organised crimes by nationals of other countries in host member states was an attestation of the threat, which would require collaborative efforts to fight.

Mr Dery said border management was critical in the overall success of this protocol and, therefore, required a harmonised and standardised technique for officers who man those borders.

She said these manuals aim to provide regional tools to enhance the capacities of border operatives and other government officials in achieving a more harmonised border management practice throughout the region.

Mr Albert Siaw-Boateng, the Director of Free Movement and Tourism, said the workshop was in line with the ECOWAS flagship of 1979, which sought to promote free movement of persons and goods.

He said the ECOWAS Commission would give serious attention to all recommendations from the workshop.

Mr Frederic Varenne, the Project Officer, European Union Delegation to Ghana, said the ECOWAS’ Free Movement of Persons Protocol had been in existence for a long time and it was high time it was implemented to accelerate socioeconomic development.