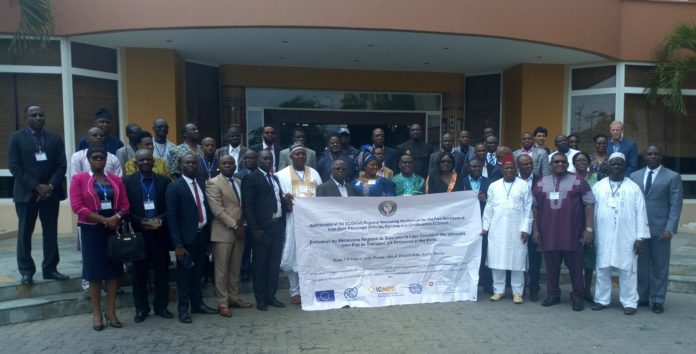 Mr. Eric Tetteh-Addison, Director of Research at the Ministry of Transport, has said, it would be a mirage if the integration of the free movement of inter-state passenger vehicles, persons and goods within the ECOWAS initiative fails.

According to him, the world was becoming a global village, thus it was important to implement the protocols to give meaning to the formation of the ECOWAS.

He said, the improper coordination among member states had been the major problem of the implementation of the Free Movement of the protocols.

Mr. Tetteh-Addison, was speaking at a workshop organised by the ECOWAS Commission, under its Free Movement Directorate, in collaboration with the International Centre for Migration Policy (ICMPD) and funded by the European Union (EU) and the Swiss Government, to discuss the initiative which was scheduled 7-9 August, 2018 at the African Regent Hotel in Accra.

The International Centre for Migration Policy Development (ICMPD) supported the ECOWAS Commission to set up a regional mechanism which will enable passenger buses to move freely across countries in West Africa, without obstacles or harassment at the borders.

He said, the European Union-ECOWAS project “Support for Free Movement of Persons and Migration in West Africa” (FMM West Africa) was a perfect example of a regional initiative that aimed to manage migration issues.

Adding that, the European Union also funds global programmes related to migration, a selection of which include activities across West Africa. Saying, “For example, we have the Migration EU expertise programme (MIEUX), which facilitates the transfer of expertise through a peer-to-peer approach, such as in the fight against human trafficking, or the programme Migrants in Countries in Crisis, which supports states and other actors to assist and protect migrants in cases of crisis.”

“Allow me also to mention the joint OECD-ILO project, funded by European Union, Assessing the Economic Contribution of Labour Migration in Developing Countries as Countries of Destination (ECLM). It is part of a comparative study covering 10 countries, including Ghana and Cote d’Ivoire. The report How Immigrants Contribute to Ghana´s Economy, launched last June, points out the positive role of international migrants but also some challenges that need to be addressed. These challenges such as fears related to trade competition and security issues may slow down the will to facilitate the international migration,” Mr. Emmanuel said.

He however said, the benefits of the regional migration outweigh the disadvantages, and the historical and cultural regional ties are so strong that ECOWAS Member States as well as their population and companies regularly pledge for increased free movement in West Africa.

According to him, the workshop was another milestone to transform that will into reality. He also indicated that, the participants were at the front line of the efforts to take concrete actions that will lead to concrete results for a better circulation of people and goods.

“At today’s workshop, there is a new opportunity to improve the coordination between actors, at a national and regional level, with the aim of addressing the remaining challenges for free-movement in the ECOWAS area,” Mr. Emmanuel noted.

Mss. Mojisola Sodeinde, the Project Manager and Head of Office, ICMPD West Africa, added that, the Mechanism had the potentials to enhance economic and social activities in the ECOWAS region without any harassment.

She urged all partners to review the mechanism to facilitate its implementation, adding that, it was the time to commit the resources needed to make the mechanism work for the benefit of the ECOWAS population.

The Mechanism, she said recognises the need to deepen integration, through a coherent and improved approach for the removal of barriers to free mobility within the region.

He noted that, the lack of awareness among the public, including border officials and managers were impeding the implementation efforts. He underscored the need to intensify education on the protocol to enhance its operation within the ECOWAS region.

Headquartered in Abidjan, the Mechanism draws extensively from the model in use in Cote d’Ivoire, based on a public-private partners that brings together relevant stakeholders within the structure of the National Steering Committee to operationalize the mechanism at the national level.

The Mechanism was also aimed to reduce the level of harassment along the ECOWAS inter-state highways, improve time and reduce red tape for transporters and passengers, as well as improving the flow of inter-state buses in ECOWAS member States.

It was also aimed to strengthen regional coordination on the free movement of persons, in line with the ECOWAS vision of a borderless and integrated region where the population enjoys free movement and has access to its abundant resources.