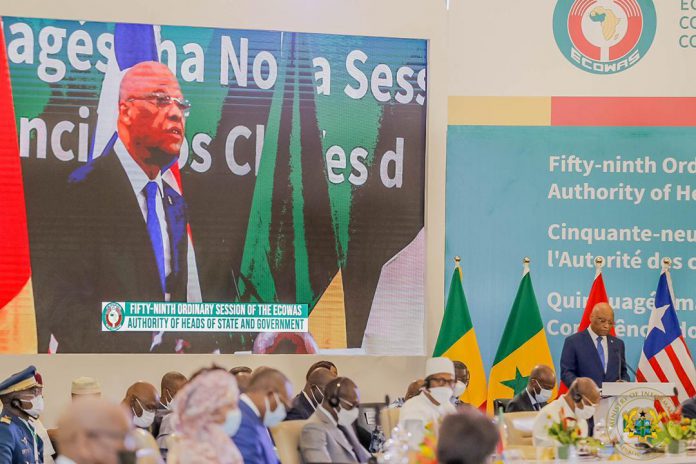 Dr Jean-Claude Kassi Brou, the President of ECOWAS Commission, has welcomed the decision by the Group of Seven Industrialised nations (G7), on June 13, to provide additional doses of COVID-19 vaccines to developing countries.

He expressed the hope that that would help increase the availability of vaccines in the West Africa Region.

He said in line with their decisions, the Commission and the West African Health Organisation had rallied to provide support to Member States in that respect.

Dr Brou said this at the 59th Ordinary Session of the ECOWAS Authority of Heads of State and Government Summit in Accra.

The Summit was formally opened by Nana Addo Dankwa Akufo-Addo, Chair of the ECOWAS Authority of Heads of State and Government.

It is being attended by all ECOWAS Member States, with the exception of Mali, due to a military coup d’etat in that country.

Dr Brou said despite the fact that the number of infections was under control, the COVID-19 pandemic still remained a challenge.

He said all Member States had started their vaccination programmes, following direct procurement of vaccine by countries or through the COVAX Facility.

With regard to terrorism, Dr Brou said despite the significant efforts made by Member States, particularly those on the frontline, terrorist attacks doubled between 2020 and the first five months of 2021.

“Over that period, there have already been more than 700 attacks and more than 2,000 civilian and military deaths, with an increase in the number of displaced persons,” he said.

Dr Brou noted that the implementation of the Regional Plan of Action to Combat Terrorism, which ECOWAS leaders adopted in September 2019, had commenced and should complement the significant efforts made by each Member State.

He said it would be appreciated if the planned funding could be mobilised to speed up its implementation.