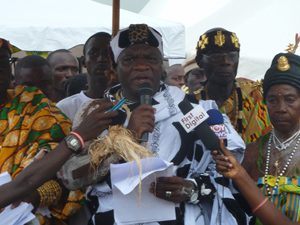 Edina Omanhen Demands Their Own Share Of Elmina Castle Tourist Proceeds From Government. Addressing thousands of people at a Durbar to climax this year?s Bakatue Festival at Elmina in the Komenda-Edina-Eguafo-Abrem Municipal Assembly (KEEA) of the Central Region over the weekend, the paramount chief Nana Kodwo Condua VI appealed to government to give the people of Edina their own share of Elmina Castle Tourist proceeds to assist them in developing the area.
According to Nana Kodwo Condua VI the castle is one of the most visited tourist sites in the country, yet Elmina, the town in which it is located, does not receive any quota of the revenue generated to facilitate its development.
He recalled that during former President John Agyekum Kufuor’s administration, some moneys were given to the town after a similar appeal was made, but the NDC government then led by the late Prof. John Evans Attah Mills with no reason cancelled all agreements and nothing has been received again ever since. ?This means the government owes the people of Edina a lot of money and it a serious judgment debt. I don?t expect political leaders to politicize this because it was painful to lose all moneys to government and yet don?t see anything the money been used for in Edina. Isn?t that painful to have a mango in front of your home and when it ripens, someone eats the fruits alone?? He asked proverbially.
He called on government to establish the fund again for them for the people of Edina to enjoy their quota through developments in KEEA. He said they need waste management vehicles to help with our sanitation challenges. ?It?s either government comes to our aid in solving these problems or we go for funds elsewhere for government to come and settle the debt from the proceeds they make from the Elmina Castle? he said.
He further stated that this year?s Bakatue festival has been about development and growing of businesses in Edina.
He commended Dr. Papa Kwesi Nduom for his dedication and the numerous developmental projects he has brought and is still bring to the Edina land. He also acknowledged GN Groupe for sponsoring and making the festival a colourful one since their efforts to get sponsorship from other corporate bodies and companies were turned down.
Hon. Nii Lantey Vandepuaye on behalf of the Ministry of Local Government and Rural Development commended the chief for his efforts in developing the Edina land and keeping it peaceful. He went on to promise that the chief?s concerns on waste vehicles would be provided as soon as possible. He also pointed out that the places of convenience for the people in his last visit were very deplorable and for that matter arrangements have been made to reconstruct a new toilet facility for the people. He also said laws are been put in place to ensure the national sanitation day a very important thing in the life of every Ghanaian.
Drawing the curtains down at the Durbar, Dr. Papa Kwesi Ndoum, 2012 flag-bearer of the Progressive People’s Party, and Chairman of Groupe Ndoum which was the main sponsor of this year’s festival, in a speech said they would go all out in ensuring that there are jobs in Elmina. The president of the republic of Elmina as he is referred to further stated that aside Fresh-Pak and other companies that are in Elmina, GN is ensuring the people that very soon Television will be manufactured in Edina, the first digital decoder will also be assembled there as well. ?The Bakatue 2016 if God willing will witness cutting of sod of a University so our people can be educated here. I?m also going to do all it takes to get Elmina Sharks into the premier league so they can also compete with the likes of Kotoko and Accra Hearts of Oaks? he stated.

GCFM Allays the Fears of Clients

A Rejoinder to Falsehood Against Dr Papa Kwesi Nduom