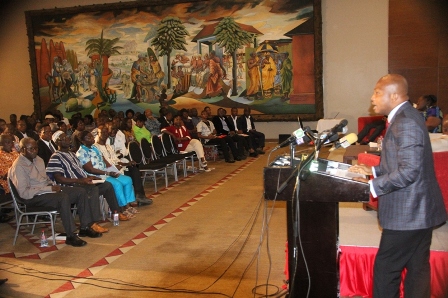 He said the draft bill on the Education Decentralisation Policy would soon be placed before Parliament for passage.

However, the regional education directorates would manage second cycle institutions in order to maintain national unity and cultural mix associated with such institutions.

Speaking at a public lecture on Education Decentralisation in Accra, Mr Ablakwa said despite the slow process of the programme, there had been some progress.

The lecture, on the theme: ‘Education Decentralisation: Updates of Progress and Clarification of Stakeholders Concerns,” was organised by the Ghana National Education Campaign Coalition with funding from the United States Agency for International Development.

It forms part of a series of activities to create public awareness and understanding of what public schools under local control and supervision could do to ensure quality education nationally.

Mr Ablakwa urged educational workers’ unions not to entertain any fears because their right to belong to any labour would not be curtailed under the new system.

Mr Ablakwa, however, said regions with excess teachers would have them transferred to the less endowed ones citing that the Greater Accra Region was having an excess teacher population of 15,000.

He said in 2013 the Ministry declared war on teacher absenteeism which was then at 27 per cent but had since reduced to about nine to 11 per cent this year.

He said analysis of the Basic Education Certificate Examination performance by students from deprived districts showed that some rural districts were doing better than others in Accra.

He called for the establishment of governing boards and management committees within basics schools as part of efforts to give them community ownership.

She said the activity placed particular emphasis on children in kindergarten through grade three.

Dr Esther Ofei-Aboagye, the Vice Chairperson of the National Development Planning Commission, said it was extremely important that care was taken to ensure the smooth implementation of the national education centralization process since all other sectors of the economy depended on it.

Mr Divine Y. Ayidzoe, the Director of Statistics, Research and Information Management, Ministry of Education, said the Ministry would continue to support government’s efforts for the smooth passage of the bill.

No Reshuffle: Akufo-Addo is out of touch with reality – Ablakwa

The Safety of President Akufo-Addo is Paramount

NDC Executives in crunch meeting with MPs over Ablakwa’s resignation