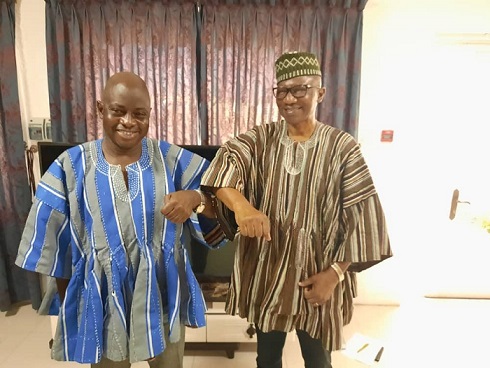 Ambassador Stephen Yakubu, Upper East Regional Minister has hinted that quality education for all was one of the top priorities of the government.

He therefore urged stakeholders to support the government to deliver this critical social services to the people.bto develop and reduce poverty.

He said Ghana could become more prosperous if education received the needed attention.
Ambassador Yakubu was speaking during a courtesy call on him by Major (retired) Albert Don Chebe, chairman of the Northern Development Forum (NDF) at his Residence in Bolgatanga.

The NDF Chairman was on the second leg of his one-week tour of some parts of Northern Ghana to consult some stakeholders on the next line of advocacy the Forum would undertake to support the development of the North.

Ambassador Yakubu disclosed that the Upper East Regional Co-ordinating Council was currently working with the Association of former Directors of Education in the region to analyse the educational challenges confronting the region to provide recommendations to improve the standards.

Major Don Chebe, commended the Regional Minister for his foresight and pledged the NDF’s support for the government in its pursuit for development to improve the welfare of the people of Northern Ghana.

He urged the government to push the Northern Development Agenda faster since the North’s deprivation was undermining the overall performance of the country’s development.

According to the NDF Chairman, the performance of schools in Northern Ghana was abysmal and therefore it was a good idea that the Regional Co-ordinating Council was proactive on matters involving education.

He therefore called on all stakeholders in education across the Northern sector to convene an emergency conference to tackle the issue of performance and quality of educational outcomes in the area.