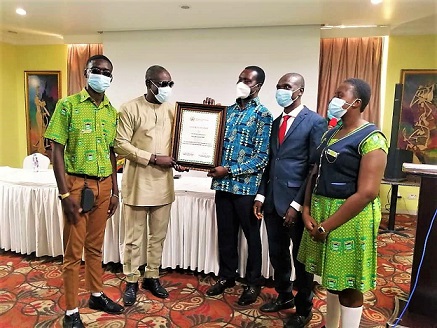 The Ministry of Education has presented Citations of Merit to 12 high-performing Senior High Schools (SHSs) in the Ashanti Region.

This is in recognition of their output and to encourage them to strive for academic excellence.

The awardees were selected out of the 135 SHSs in the Region.

Dr Adutwum, presenting the citations at a ceremony in Kumasi, said the Ministry had begun a recognition programme to honour SHSs that performed well nationwide.

He said researchers would be sent to the various high-performing schools to document best practices and use them as a guidelines for other schools to improve academic performances.

He said government was committed to churning out talents in education to help transform the economy.

“We want a Ghana where the rich and poor will be able to study together and create a better nation together,” he said.

Dr Adutwum announced that the Ministry was working towards phasing out the ‘Double Track System’ to ease pressure on public senior high schools to mitigate the current inconveniences the system posed to students, teachers and parents.

The Minister and the Regional Director of Education, Ms Mary Owusu Afriyie, later visited some SHSs in the Kumasi Metropolis and Asokore-Mampong Municipality to interact, assess progress of projects and monitor academic activities.

They included the Kumasi Anglican, Kumasi Academy, and Sakafia SHSs.

At the Sakafia SHS, Dr Adutwum commissioned a 12-unit girls’ dormitory block and pledged to lobby infrastructural development for the smooth running of the School.

Mr Mohammed Saeed, the Headmaster, commended the Government for the ‘Free SHS’ policy, saying since its introduction enrolment had increased from less than 200 to 2,200 students currently.

He appealed to the Ministry to expedite action on securing more logistics for the School.