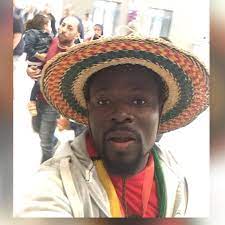 The Chief Executive Officer (CEO) of African Youth Peace Campaign and President of Pan African Alliance in the Middle East, Edward Osagyefo has taken a swipe at Kwadwo Sheldon for wasting water during the peak periods of COVID-19.

It could be recalled that, weeks after the emergence of COVID-19 in Ghana, government introduced Free Water regime to cushion people as they contain and survive the pandemic whilst on lockdown.

A video went viral, believed to be Kwadwo Sheldon who sat in a bucket, opened a pipe whilst pouring the water he fetched from the pipe onto himself, because water at the time was made free.

Although most people criticised his actions, some also followed and liked his video.

However, Edward Osagyefo who recently returned to Ghana expressed great disappointment in Kwadwo Sheldon during an interview on Agona Swedru based Radio Station, Obrempon 91.7 fm on Friday July 9, 2021.

He said Kwadwo Sheldon who is claiming to be a Freedom Fighter has no brain.

Speaking in an interview, Edward Osagyefo said lots of things are happening in Ghana which must be corrected and that before that can be done; Ghanaians themselves need to be fair to each other in their dealings as far as governance and development is concerned.

Edward Osagyefo said Kwadwo Sheldon who is calling himself a member of Freedom Fighters, at a point in time

Part of the freedom fighters fought Afia Pokua of Despite Group of Companies, because she (Afia) criticised Twene Jonas over his videos and comments.

“The same person is criticizing Galamsey; which is positive,” he said.

However, he averred that Kwadwo Sheldon got it all wrong when he engaged in the act of wasting water during COVID-19 Lockdown just because water was declared free by the government.

Edward Osagyefo described his action as not far away from that of a Galamseyer who he (Kwadwo Sheldon) has been criticising.

“He is also as guilty as galamseyer. He is also a Galamsey man, people in the forest are destroying our water bodies and he is also at home, in the city wasting out water. What then is the difference between him and those in the forest doing Galamsey,? he asked.

According to Edward Osagyefo, there is a saying that those with big heads must equally have big brains but Kwadwo Sheldon seems to have a big head but a very small brain, hence his childish attitude.

Localizing Reparations During an Era of Intensified Repression