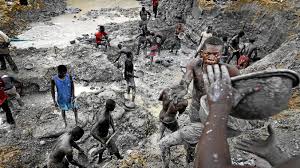 Galamsey, which is locally known in Ghana as the illegal mining activity or mechanism to extract gold and other mineral resources is on the rise. People who engage in such act are known to be independent workers from the known commercial mining companies in the country; hence making their ways illegal. Under the current Ghana law, it is illegal for those who engage in the galamsey activities to dig on land granted to mining companies as concessions or licenses; hence, they overlook such law and proceed using those lands for small scale illegal mining. After digging deep into the land, they find gold in the free metallic dust form or they process oxide or sulphide gold ore using liquid mercury.
The number of galamseys in Ghana is unknown, but it is believed to be from 20,000 to 50,000 upon which most of them operate in communities where there are substantial reserves of gold deposits and usually within the environs of the larger mining companies.
Most young people, including children, are notable for engaging in such act with the idea of getting ?quick money?. The women, mostly act as porters for the miners, the men are known to be the doing the digging while the children are also seen at the pit running errand. They have high rates of accidents and are exposed to mercury poisoning from their crude processing methods, but they do not consider these effects.
According to a special report on the cost of galamsey in the country by Ghana Extractive Industries Transparency Initiative (GHEITI), a visit to the illegal small-scale mining areas in the Ashanti and Central regions recently revealed the unbelievable vastness of degraded lands and the pollution of rivers.
Apart from the negative effects of the galamsey activities on their lives, it posses more negative effects on our natural resources, including land and water bodies in the country.
The idea of acquiring money within a simple means has been the motivation behind the children engaging in the illegal mining activities in the mining communities. Most of the young people in such communities do not value the significance of education; hence, choosing galamsey over education.
A report by Daily Guide on May 4, 2015 with the headline ?Pupils Abandon School For Galamsey? reflected that, indeed galamsey has become the biggest factor to hinder the children from enjoying their right to education.
It was revealed in the report that, many children of school going age have abandoned classrooms and are now into full scale illegal mining activities, in view of the cash benefits that come with these activities, despite the associated risks.
Moreover, the enrollment figures in most basic schools in the district Daily Guide observed were sharply declining as pupils had put on hold their plans to pursue formal education to chase ?quick money.? (Read the story here: http://www.dailyguideghana.com/pupils-abandon-school-for-galamsey/)
These children, ignore the negative impact of this illegal mining activity and rather concentrate on how and ways to engage in this activity to search for gold. Most of them also imitate their siblings and other elderly people who are also seen ignoring school to do galamsey.
On the other hand, the existence of the illegal mining has gotten to the level where even candidates who are about writing an exam that can guarantee them entrance to the secondary school abandon the exams for galamsey.
According to Rawgist.com, four candidates writing the 2015 Basic Education Certificate Examinations (BECE) at the Mensonso D/A Junior High School (JHS) in the Adansi South District of the Ashanti Region have abandoned their examinations to engage in illegal Mining activities popularly called ?Galamsey?.

It was estimated that, out of 253 who registered for the examination, 248 candidates were present as the four male students were said to have abandoned school to join their colleagues at the Galamsey pits. Read more here: http://rawgist.com/2015/06/16/candidates-abandon-bece-for-galamsey-activities)
One can analyze that, most of these young children have not yet understood the significance of education; hence resulting in low attendance of school and low participation in educational activities in the mining communities.
This is indeed a wake-up to the Ghana Education Service (GES), the Ministry of Education, stakeholders and other non-governmental organizations to organize public education in these mining communities to educate the young people on the need to make education a priority.