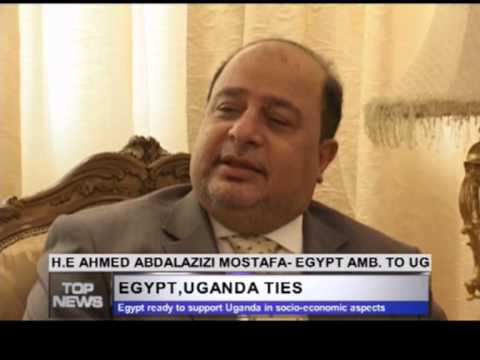 After assuming power in 2013, Egyptian president Abdel Fattah el-sisi participated in the African Summit. One of the African presidents he was keen on meeting is President of Uganda because Uganda is a strong ally of Egypt.

?We received a lot of support from this country throughout the difficult period. President Museveni did not approve of suspending Egypt from the African Union when the idea was suggested. That is why when our president declared a new African strategy; Uganda was on top of our list,? says Egyptian Ambassador to Uganda, Ahmed Abdelaziz.

?We did not suspend our technology programmes in Uganda during the insurgency because we knew Uganda as a close ally,? he adds.

?We hosted the first exhibition of Egyptian products in Uganda and 65 companies exhibited what they manufacture. This is so that the trade balance between the two countries improves.?

?We are encouraging Egyptian investors to come to Uganda. There are currently two companies building factories in Uganda,? he reveals.

Abdelaziz further adds that Egypt is in the final study of the Lake Victoria Mediterranean transport route along the Nile project. This is a direct way that links Alexandria to all countries passing through the Nile.

In the past, Egyptian doctors have come to Uganda to carry out special operations requiring high expertise that is limited or lucking in Uganda.

Abdelaziz promises that this is to continue. ?There are proposals we have submitted to Ministry of Health to send specialist doctors to work on the harder conditions Uganda may not be well-equipped to handle,? he says.

Through the years, Egypt has registered ground-breaking medical achievements. They have a hospital specially for treating children with cancer. This is done free of charge and is the second biggest of its kind in the world.

Egypt has for the past years had a full-fledged heart surgery hospital run by Sir Megdy Yacoub, knighted by the Queen herself.

?This is a service is also open to Ugandans. All they have to do is apply through the Egyptian or Ugandan embassy.?

The Egyptian government recently offered Uganda a team of experts in modern water harvesting and deforestation in a move aimed at increasing domestic water supply and conservation of environment.

?We would like to get a technical expertise team to come to Uganda and support you in areas of modern water harvesting and deforestation,? said Abdelaziz.

Adding ?Look into our proposal and see whether you would be interested,? he said though he did not say exactly when the experts would be flown into the country.

Minister of Water and Environment Prof. Ephraim Kamuntu said that he was very passionate about seeing Ugandan women and children accessing water from their homes through modern water harvesting technology which he says is looking forward to receive from Egypt.

He said if modern technology of harvesting water for domestic use is taught to Ugandans, eleven million Ugandans mostly children and women especially in rural areas would benefit.

Kamuntu says that if modern ways of water harvesting are taught to Ugandans, about eleven (11million) Ugandans especially women and children can benefit.

?I want to see households turn on ups and water flows and until I see this, my job is not yet done,? he said.

Getting rid of water hyacinth

Uganda partnered with Egypt to remove the weed that evaded Lake Kyoga. The task of clearing the weed started in 1999 and has registered two successful phases.

The first phase which started on Lakes Victoria and Albert, River Kagera and some parts of Lake Kyoga cost about $13.9million.

The Head of Mission for Egypt Irrigation Mission in Uganda, Dr.Yosry Khafagy said since they had worked on several lakes in Uganda to mitigate the weed, the same will be done on Lake Kyoga.

The third phase intended to completely clear the weed from L. Kyoga and to construct the proposed 15 dams in the northern and eastern part of Uganda started.

The project estimated at US$ 2.0 million is also expected to remove over 15 million m? of aquatic weeds blocking the lake?s outlets, improve fishing activities and the construct a pilot fish farm.

The construction of 15 water harvesting dams to collect Nile water for household and animal use, clearing of the weeds threatening the stability of the Pakwach Bridge which connects Uganda to the Democratic Republic of Congo and Sudan will also take place in this phase.

Egypt also established the Egyptian Agency of Partnership for Development (EAPD) meant to grant technical cooperation and humanitarian assistance to African and Islamic countries, organising training courses and workshops, promoting the collaboration with the United Nations, developed countries, regional and international organisations within the framework of south-south and north-south cooperation, as well as contributing in funding and in mobilising funds for development projects.

Currently, Sameh Shoukry, the Minister of Foreign Affairs, chairs the Agency?s Board while it is administered by a Secretary General; Ambassador Dr. Hazem Fahmy.

This independent institution is operating according to the established business methods of development aid agencies in the world. One of the principal goals of EAPD is to provide to African and Islamic countries capacity building programmes.

It is in this line that we offer our African army and police officers free training opportunity at the Nasser Military Academy and the Police Academy. Of course we shall not be at the level of the British police but we shall help improve their capacity.

By Gilbert Kidimu, The New Vision