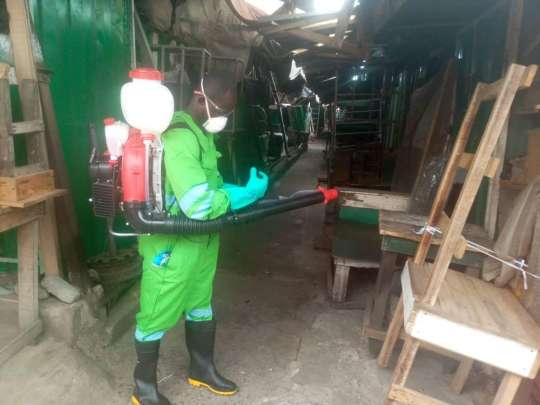 Eight traders were on Monday picked up by security officials for defying the directive not to sell at the Ashaiman market for a disinfection exercise to be carried out.

The exercise, which was sanctioned by government to be carried out in all markets in the Greater Accra Region, was one of the measures to prevent the spread of COVID-19 in the country.

Mr Albert Okyere, Ashaiman Municipal Chief Executive, said the eight were cautioned and educated on the COVID-19 disease after which they were released.

Meanwhile, the disinfection exercise in the market went on as scheduled as chlorine diluted with water was sprayed through the entire market.

The Ghana News Agency observed that the market was generally unkempt and unhygienic with rotten fruits and vegetables all over.

The MCE said prior to the disinfection, his outfit sensitized the market queens and other key persons in the market to serve as peer educators among the traders adding that sensitisation was still ongoing to ensure residents fully understood the severity of the giobal medical crises.

He added that education was ongoing at the various electoral areas.

Mr Okyere added that they tried the implementation of social distancing in the market but they realized that it was virtually impossible due to the congestion so the traders were advised to use handkerchieves and nose masks as well as practice proper hand washing..

He disclosed that the Assembly had long term plans to decongest the market.

Mr Ishmael Ashitey, Greater Accra Regional Minister said government came up with the disinfection exercise to help reduce the risk of spreading the disease at the markets.

Mr Ashitey called on the Assembly to frequently fumigate the market to rid it of rodents which could equally cause other sicknesses.