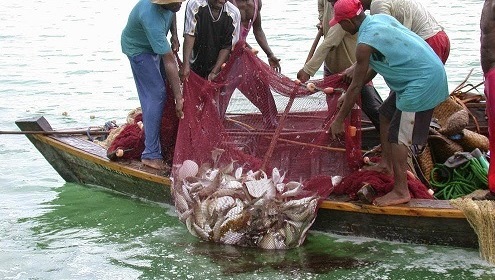 The Environmental Justice Foundation (EJF) and Hen Mpoano, implementing partners of the “Far Dwuma Nkodo” project have launched a mobile application that allowed fishermen to gather evidence of illegal fishing practices at sea.

The App, locally called “DASE” in Fante, which means evidence, provides a simple, user-friendly application with the potential of helping fisher-folks rid Ghanaian waters of illegal fishing that threatened their livelihoods.

Speaking at the launch, Mr Socrates Segbor, Fisheries Programmes Manager of EJF explained that although Ghana’s fisheries laws designated the Inshore Exclusion Zone as an area reserved for artisanal fishers, fishers reported that industrial trawlers have been invading their zone in contravention with the law.

He said illegalities such as dumping and discarding of fish catch, illegal trans-shipment as well as destruction of fishing gears were regularly reported but often, the fishers were unable to provide accurate evidence of the incident for the law to be applied to the offenders.

Hence, the reason for the development of the mobile application to gather evidence in the marine fisheries sector.

He was confident that the App would go a long way to help address gaps in reporting to enable the fishers to gather and provide evidence on illegalities or accidents at sea in a few easy steps.

This, he explained would allow information to be shared by coastal communities with the Fisheries Commission (FC) for the effective prosecution of recalcitrant vessel operators and the application of deterrent sanctions.

After piloting the App in mid-2019, over 700 fishers had been trained on the App across 48 coastal communities in collaboration with the Ghana National Canoe Fishermen Council (GNCFC).

So far, he said more than 100 fishers have had the App installed on their smartphones and the first report was made in December 2019.

Mr Segbor said the “Far Dwuma Nkodo” project has since 2017 been working hard at securing greater environmental sustainability and social equity in Ghana’s fisheries sector by supporting efforts to reduce illegal fishing and building capacities of fishing communities in the sustainable management of their resource.

The project is being funded by the European Union (EU) and the German Federal Ministry for Economic Cooperation and Development.

As part of the project, he said EJF has been working to establish a system of community surveillance along the coast of the Central Region to support and empower fishers to report on instances of IUU fishing activities they observe at sea as well as cases of conflict with other fleets using technology solutions.

Mr Segbor encouraged stakeholders to familiarize themselves with the functions and purpose of the App as well as its relevance to fisheries management and enforcement.

Mr Nii Amponsah, Head of the Monitoring Center and Surveillance Division of the Commission said the App would complement the work of FC in monitoring vessels.

Nana Jojo Solomon, Executive Member of the GNCFC“ noted that illegal fishing was causing the collapse of Ghana’s staple fish stocks, loss of food security, livelihoods, and tens of millions of dollars in national revenue.

He stressed that with the App, canoe fishers no longer have to stand-by while industrial vessels fishing illegally in their fishing zones.