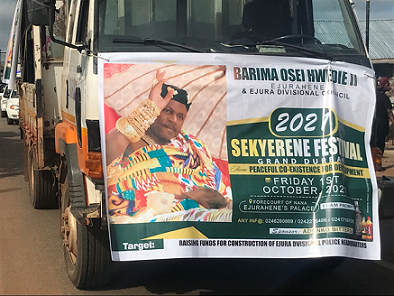 The Ejura Traditional Council said this year’s Sekyerene (Yam Festival) will focus on promoting peace, reconciliation and harmony among the people in the community.

The two-week festival, scheduled to begin with Muslim prayers on Friday, September 24, will also raise funds to support the construction of a police divisional headquarters in the town as part of efforts to improve security.

Nana Osei Ansebie, the Nifahene of Ejura, said this at a press launch of this year’s Sekyerene Festival at Ejura on Monday, on the theme: “Peaceful Co-existence for Development.”

It is designed to bring the people together after the recent violent disturbances in the community.

Two other young men were killed while several others got injured when the youth clashed with the military officers who were deployed to maintain law and order in the heat of the demonstration.

A three-member Committee of Enquiry, under the Chairmanship of Justice George Kingsley Koomson, an Appeals’ Court Judge, was set up by the Government to investigate the causes of the disturbances and deaths and make recommendations.

The Committee had since finished work and submitted its report to the Government.

A grand durbar, expected to attract dignitaries such as political, religious and business leaders as well as chiefs, would be held on October 1 to raise funds to support development initiatives by the Traditional Council.

Nana Ansebie said the Traditional Council, led by Barima Osei Hwedie II, Ejurahene, had been keen on the construction of a divisional police headquarters at Ejura following a surge in highway robberies as well as violent social and political clashes.

He said a Sekyerene Fufu Party would be organised on Saturday, October 02, to signify the availability of the new yam.

Ejura is noted for the production of yam, maize, and groundnut among other food crops.

It is a cosmopolitan community of people from different ethnic groups and diverse religion, political and social backgrounds.

Nana Ansebie called on all community members to actively participate in the Yam Festival to promote peaceful co-existence.