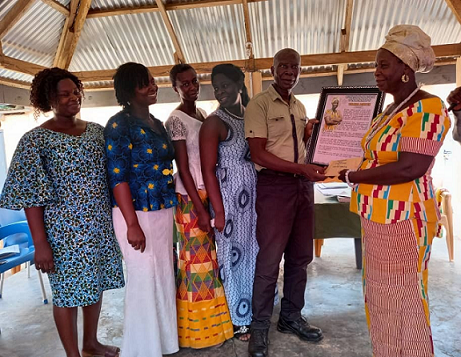 Elder Kudzo Agbetum, Elder, The Church in Hohoe, has said women were important and deserved the best in life.

He said despite the sacrifices of most women especially wives, they were neglected and discriminated against.

Elder Agbetum during a short ceremony to honour his wife, said it was meant to recognise and appreciate her motherhood.

He said women, biblically, have played significant roles in the life journey of Jesus Christ.

The Elder said women must be recognised as special gifts of God’s creation and deserve the best care.

“Woe to him who builds his house by unrighteousness and his chambers by injustice, who uses his neighbour’s service without wages and gives him nothing for his work – Jeremiah 22:13″

He bemoaned how women were denigrated as well as unfair treatments meted out to them with the notion that “women are in abundance” and called for a retrospection of the notion of treating women with utmost respect.

“Women go through a lot in keeping homes, pregnancy, childbirth and raising children, they carry out chores and their works are unending and it is a mistake on the parts of men who do not value these roles.”

Elder Agbetum said there was the need for couples to sort out their differences and live in harmony.

Mrs Veronica Agbetum, wife of the Elder, said she was overwhelmed by her husband’s gesture to appreciate and honour her.

She said her husband was supportive especially towards the education and instilling the word of God in their children.

“He is always interested in the education of our children and their Christian lives. He buys books and bibles for our children at tender ages.”

Mrs Agbetum called on husbands to be very supportive towards their wives as well as providing educational needs of their children.

Daughters of the couple touted the achievements of their mother, which shaped them in all aspects of their lives.

They said their father played his fatherly role with tremendous support towards their upbringing, adding that, “they gave us the best”.

Elder Agbetum who presented a citation and cash prize to his wife said “this is just to recompense my wife, I cannot pay her for all her services” while his daughters presented a washing machine to their mother.