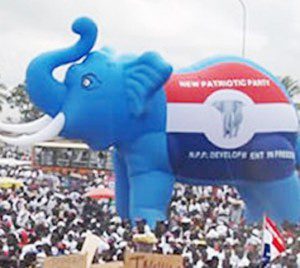 According to him, followers of the New Patriotic Party (NPP) who would be representing the elephant at the polling station will not spare anyone when caught in such act.

He told thousands of NPP followers who stormed the Atomic Park in Accra on Wednesday to lend their support to the campaign launch of the MP for Dome/Kwabenya, Sarah Adwoa Safo that any ballot box snatcher shall be treated like kebab (kyinkyinga) when caught in the act.

He said if you look at happenings in the country in relation to the upcoming general elections, the ruling National Democratic Congress (NDC) has only one option under its sleeve to win the mandate of the people.

That option, he noted, is to “steal the votes of the electorates” by snatching ballot boxes from the polling stations.

“What is left for the NDC to do is to steal the mandate of the people but before they will arrive at the polling station, we will be there waiting for them. And anyone who dares come to the polling station to snatch the ballot box shall be treated like kyinkyinga.”, he noted.